Update Required To play the media you will need to either update your browser to a recent version or update your Flash plugin.
By Caty Weaver
29 August 2022


International aid is flowing to Pakistan as the military and volunteers there struggle to rescue many thousands of people trapped in flooding. More than 1,100 have already died as a result of extreme seasonal rains this summer.

The Associated Press estimates that nearly one half million people are in camps after losing their homes. 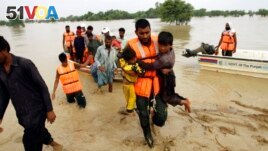 Turkey and the UAE were among the nations that promised to help Pakistan after officials called for international help. Monsoon storms, the seasonal rains of South Asia have been heavier and earlier than usual. Pakistan received heavy rains last week that affected almost the whole country.

The United Nations will launch an international appeal for Pakistani flood victims on Tuesday in Islamabad.

Prime Minister Shabaz Sharif on Monday said the rains are the heaviest Pakistan has seen in 30 years. He spoke from Charsadda, one of the towns hurt most by flooding.

Sharif has said the government would provide housing to all those who lost their homes. However, many people displaced by floods say they not only lost their homes but their crops and small stores, as well.

The rains stopped two days ago. However, large areas were still covered with water Monday. The water was up to a meter high in some places, especially in the south, witnesses said. Weather experts predict dry conditions for the coming days, offering hope flooding will ease.

Pakistani officials say this year's destruction is worse than in 2010, when floods killed more than 1,700 people.