Update Required To play the media you will need to either update your browser to a recent version or update your Flash plugin.
By VOA
24 July, 2012

MARIO RITTER: Welcome to the VOA Special English program EXPLORATIONS. I'm Mario Ritter. The International AIDS Conference is the world's top event for people working on the issue of HIV, for those living with HIV, and for those affected by it. The conference is held every two years. But this year's event is special. It is the first time the United States has held the International AIDS Conference in twenty-two years.

The International AIDS Society organizes the conference, also called AIDS 2012. It decided to hold the conference in America after President Obama ended a ban barring HIV infected people from entering the country. The ban ended on January fourth twenty ten.

This week we explore the opening of this historic conference. Faith Lapidus and Christopher Cruise tell us more. 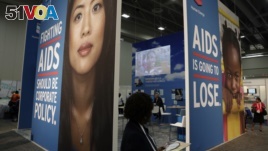 A visitor passes an exhibition at the International AIDS 2012 Conference in Washington July 23, 2012.
FAITH LAPIDUS: San Francisco AIDS expert Dr. Diane Havlir is co-chair of AIDS 2012. Earlier in July, she told reporters in Washington that this year's event was historic.

DIANE HAVLIR: "But probably the most important reason why we think this is going to be a historic event is because we really do think we are at a turning point of this epidemic. For the first time ever, and I've been working in this field since the very beginning, we feel like we can declare that we are at the beginning of the end of the AIDS epidemic."

She said it would be an extraordinary failure of global will and conscience if financial cuts blocked that chance.

CHRISTOPHER CRUISE: The United Nations says thirty-four million people lived with HIV / AIDS in twenty-eleven. And it says one point seven million died from the disease.

FAITH LAPIDUS: More than one thousand people marched through central Washington to call attention to HIV/AIDS on Sunday. Excitement mixed with hope at the gathering because of a feeling that AIDS might finally be overcome.
The crowds shouted their demands as they marched down Pennsylvania Avenue.

But they also celebrated.

CHRISTOPHER CRUISE: It was the first time the conference, has met in the United States since nineteen ninety. Since then, it could not be held all these years in the United States because of travel restrictions on people living with AIDS. Yet during that time, the face of the epidemic changed a great deal.

AIDS has killed more than thirty million people since the nineteen eighties. Michel Sidibe is executive director of the Joint United Nations Programme on HIV / AIDS. He says treatment and prevention tools now exist that could put an end to the disease.

MICHEL SIDIBE: "This time it is different. This time, together, we will end AIDS."

WYCLEF JEAN: "One in five [people] with HIV don't know that they are affected, so direct the question to you. My name is Wyclef; I'm Haitian..." ((cheering))


The conferences are also about support and debate among many communities.


RODERICK MAYES: "There is no negative connotation for those other diseases, but HIV . . . ."

Roderick Omar Hayes is a former U.S. Marine. He found out eight years ago that he had HIV, the virus that causes AIDS. He is concerned that that fact causes others to judge him differently.


RODERICK MAYES: "The main thing I think is the stigma, you know. Because you don't know who to talk to about it, who it's okay to talk to about. And people judge you differently, as if you're subhuman because you have HIV or AIDS."

But now Mayes says he's hopeful that will all end, if enough is done to cure the disease.

CHRISTOPHER CRUISE: AIDS 2012 has also brought attention to groups that are deeply affected by HIV/AIDS. Sex workers say discrimination and old laws place them at greater risk of HIV infection, abuse and violence. They also spoke out at the International AIDS Conference.

Sex workers, along with homosexual men and intravenous drug users are three groups in which HIV infection still is rising rapidly.


One meeting included members of the international sex workers' rights movement. Sienna Baskin is with the Sex Workers Project at the Urban Justice Center in New York City.

SIENNA BASKIN: "In 2011, the U.N. Global Commission on HIV and the Law held regional dialogues around the world. Sex workers participated in every dialogue, sharing how laws affect their access to HIV prevention and treatment, testimony about human rights abuses and practical recommendations for change. We thought that the International AIDS Conference needed to hear these same messages."


KHOLI BUTHELEZI: "One of the examples, in Mpumulanga, police go to sex workers where they stay because they know where they live. And then when they get there, they destroy condoms."

SIAN MASEKO: "Criminal laws are often used as a justification for stigma and discrimination against sex workers from various service providers, institutions and in general the wider community.

She says good health is more than physical. It is also a sense of well-being, along with personal safety and security.

The group also criticized a part of PEPFAR, the President's Emergency Plan for AIDS Relief. It is a rule known as the Anti-Prostitution Loyalty Oath. It is more commonly known as the anti-prostitution pledge, and is contained in the two thousand three United States Leadership against HIV/AIDS, Tuberculosis and Malaria Act.

It requires groups receiving United States support to fight HIV/AIDS around the world to agree to a policy of opposing sex work and human trafficking. International organizations face either taking the pledge or losing funding.

The international sex workers' rights movement and others have launched a campaign to cancel the pledge, as well as provisions that block immigration based on sex work. They are also calling for an end to criminal laws against sex work. They say it drives sex for pay underground while increasing the risk for violence and of not receiving health services.

CHRISTOPHER CRUISE: The HIV/AIDS epidemic is more than thirty years old. But, at this year's International AIDS Conference there was talk of ending the disease through scientific progress and public health policy.

Dr. Anthony Fauci says it was many small steps over more than thirty years that led to today's major gains against HIV/AIDS.

DR. ANTHONY FAUCI: "We want to get to the end of AIDS. That will only occur with some fundamental foundations. And these foundations are basic and clinical research, which will give us the tools, which will ultimately lead to interventions and then ultimately these will need to be implemented together with studies about how best to implement them."

Dr. Fauci says the understanding of the HIV replication cycle is probably the most important of the many scientific gains. He says it has revealed some of the virus' weaknesses.

FAITH LAPIDUS: Dr. Fauci says the first antiretroviral drug, AZT, offered a "glimmer of hope." But its effects were small and did not last long. Years later, two drugs were used with better results. But they were still not good enough. There are now thirty drugs approved to treat HIV.

But is a cure possible? Scientists are working on a few possibilities, such as finding a way to remove the virus from the body. Dr. Fauci calls that a "functional cure." That means, improving the body's immune system to deal with HIV or somehow changing cells to resist the virus. Dr. Fauci calls it a "scientific challenge." But, he says it can be done.

MARIO RITTER: And that's EXPLORATIONS, a VOA program in Special English. It was adapted from reports by Joe de Capua and Jerome Socolovsky. Faith Lapidus and Christopher Cruise were your announcers. I'm Mario Ritter.

You can see other reports on HIV/AIDS at 51voa.com. For English learning activities and interactive features, click on The Classroom at VOA Learning English. And follow us on Facebook, Twitter, YouTube and iTunes. Join us again next week for more EXPLORATIONS.
Related Articles
go top