Update Required To play the media you will need to either update your browser to a recent version or update your Flash plugin.
By Dan Friedell
25 August, 2017

The military used the planes for British bombing raids over Germany during World War I.

The DH.9s were known as "strategic bombers." They were one of the first warplanes where pilots did not drop bombs by hand. 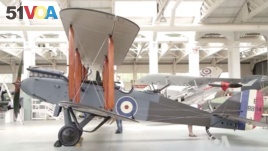 A wide view of a restored de Havilland DH.9 at the Historic Aircraft Collection in England.

The bombs were stored inside the fuselage, or main body, of the plane. Pilots released them by opening a door with a lever. The plane was large enough to carry two large bombs or four smaller ones.

Of the 2,000 DH.9 planes used in World War I, only about six were saved. Or at least that is what people thought until about 20 years ago, when several DH.9s were discovered in rural India.

Britain donated those planes to India, then a British colony, at the end of the war. The website AirHistory.org.uk says India received 60 of the aircraft.

For many years, people thought nearly all the DH.9s were destroyed or used to supply parts for other planes. That changed in 1998, when a lover of historic aircraft found several DH.9s in India in an unusual place: a building where an elephant was once kept.

Janice Black is the director of Britain's Historic Aircraft Collection.

What was left of the old airplanes was purchased and shipped back to England for restoration. The repairs took about 60,000 hours.

In 2007, the Imperial War Museum bought the first restored DH.9 for about $1.3 million, but it does not fly.

The planes are important in the timeline of military history. But they were not especially successful warplanes.

Their engines that were not very strong, so the military could not depend on them in battle.

However, after the war, many were used to carry mail and even passengers.

The Historic Aircraft Collection team is working to restore another DH.9. This time, they hope to make it airworthy and fly late this year.

George Putic wrote this story for VOANews. Dan Friedell adapted his report for Learning English. George Grow was the editor.

What do you think of this historic airplane? We want to know. Write to us in the Comments Section or on 51VOA.COM.

strategic – adj. useful or important in achieving a plan or strategy

lever – n. a bar or rod that is used to operate or adjust something on a machine, vehicle, or device

stable – n. a building in which horses are kept, fed, and cared for

estate – n. a large piece of land with a large house on it

restoration – n. returning (something) to an earlier or original condition by repairing or cleaning it