Update Required To play the media you will need to either update your browser to a recent version or update your Flash plugin.
By Phil Dierking
13 January, 2017


After a year of clashes between American citizens and police officers, police in Alaska are trying something different: Making 2017 a "Year of Kindness."

The police department in Juneau, Alaska launched the campaign to urge residents to perform at least one act of kindness every day.

The department says it hopes to "build bridges" between people to overcome racial, religious or socioeconomic differences.

The idea for the campaign came from police Lieutenant Kris Sell. She told VOA that her concern was not just for police, but also for safety of citizens.

Sell said the Juneau police are doing several different things to support the campaign. For example, officers are giving away donated socks the first Saturday of each month for anyone who needs them. 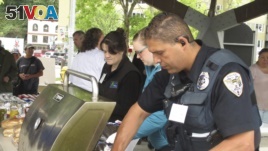 She also said the police department has developed a 'kindness surge' calendar. Juneau residents and community groups can sign up for weekly activities on the planner.

Sell said the goal is to measure the effect of kindness on crime, suicides and emergency calls by the end of 2017.

She adds that the campaign has received a lot of support.

"What I did is went out to the community, to say ‘how about we as an entire town push back against hatred and violence and just negativity?' And I got a tremendous amount of support. The town was very excited about it. I'm not sure why this particular effort resonates so much with people, but I think it has to do with a position across the country that people don't like what they are seeing happening around them, and they want to do something to try and change their environment."

Sell said it makes sense for police officers to take the lead on a kindness campaign because they are the people who react when people don't treat others well. She hopes the campaign will spread across the country so other communities become nicer places to live.

"I can change what I do every day and I can change the area six feet (two meters) around me, but if I get thousands of people in the community on board with doing that, I think you can change an entire community. And that's what we are hoping to prove with this initiative, in that we can change what it feels like to live in a particular city..."

She noted that the kindness campaign does not extend to law enforcement activities. Tickets for speed or other traffic violations are not being forgiven.

Victor Beattie wrote this story for VOANews. Phil Dierking adapted his report for Learning English, and included information from other media sources. George Grow was the editor.

Do you think a campaign of kindness by the police is a good idea? We want to hear from you. Write to us in the Comments Section or on 51VOA.COM.

sock – n. a piece of clothing that is worn on your foot and that covers your ankle and sometimes the lower part of your leg

socioeconomic – adj. of, relating to, or involving a combination of social and economic factors

surge – v. to suddenly increase to an unusually high level