Alec Baldwin to Be Charged with Manslaughter in Set Shooting

Update Required To play the media you will need to either update your browser to a recent version or update your Flash plugin.
By Hai Do
19 January 2023


U.S. government lawyers announced Thursday that actor Alec Baldwin will be charged with involuntary manslaughter in the shooting death of a cinematographer while filming a movie in New Mexico.

Cinematographer Halyna Hutchins died shortly after being wounded during rehearsals for the movie Rust on October 21, 2021. Baldwin was pointing a handgun at Hutchins when the gun went off, killing her and wounding the film director, Joel Souza. 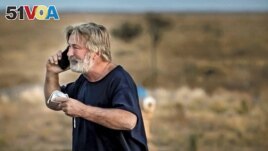 FILE - Alec Baldwin, after he was questioned about a shooting on the set of the film "Rust" outside Santa Fe in 2021. (Jim Weber/Santa Fe New Mexican via AP)

Santa Fe County Sheriff Adan Mendoza led the investigation into Hutchins' death. He described "a degree of neglect" on the film set. But his report did not say how live ammunition got on the film set. Filmmakers usually use ammunition without bullets, called blanks, on movie sets.

Baldwin was the co-producer of Rust. He is well known for his acting in the television show 30 Rock and for his work in the film The Hunt for Red October.

Baldwin has described the killing as a "tragic accident." He is taking legal action against people involved in handling and supplying the gun that was handed to him on the set. The actor said he was told the gun was safe.

In his lawsuit, Baldwin said he pointed the weapon in Hutchins' direction while practicing with camera angles on the set. The gun then discharged.

New Mexico's Office of the Medical Investigator had ruled that the shooting was an accident after examining Hutchins' death and law enforcement reports. And New Mexico's Occupational Health and Safety Bureau has fined the movie production company for safety failures.

A lawyer for Hannah Gutierrez Reed has said she did not put live ammunition in the gun that killed Hutchins. Gutierrez Reed says she believes she was the victim of sabotage. But officials say they have found no evidence of that.

Investigators found 500 pieces of ammunition at the movie set outside of Santa Fe. They were a mix of blanks and what appeared to be live ammunition. Industry experts have said live ammunition should never be on a movie set.

The family of Hutchins has settled a lawsuit against the producers of Rust. The agreement aims to restart filming the movie with Hutchins' husband as a producer.

Hai Do adapted this story for Learning English from an Associated Press news report.

manslaughter - n. the crime of killing a person without intending to do so

cinematographer - n. the person who films a movie