Update Required To play the media you will need to either update your browser to a recent version or update your Flash plugin.
By VOA
25 December, 2015

It is the leading English-language newspaper in Hong Kong.

Joe Tsai is executive vice chairman of Alibaba Group. He said in a letter to SCMP readers that Alibaba wants the newspaper to offer "accurate and fair" reporting that will improve global understanding of China.

The company said this will help Alibaba's investors. Alibaba believes that "negative reports about China in the Western news media are hurting the company's shares," which are listed in the U.S., reported the New York Times. 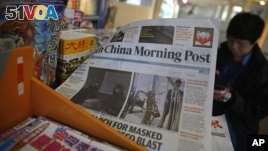 The New York Times said that Alibaba has agreed to pay about $266 million to acquire the South China Morning Post. This is a "small outlay" for Alibaba, which has annual revenue of $12 billion, according to the Times.

The purchase follows other media deals by Alibaba, reported Reuters. In June, the company agreed to pay $194 million for a stake in the China Business News, a financial media firm.

The South China Morning Post, which is 112 years old, had been struggling financially. SCMP, its owner, was criticized for "shaping its coverage of China with a more positive stance than other outlets," according to TechCrunch. The New York Times described the SCMP as "a frayed institution with a depleted newsroom" and a declining readership.

Alibaba plans to make all the articles free on SCMP's website.

China's ruling Communist party has tight control over Internet use in the country. It blocks material that it considers obscene or subversive. Party censors under Chinese President Xi Jinping have been increasingly intolerant of critical reports in the domestic news media, reported the New York Times.

Some analysts compared Alibaba's purchase of SCMP to Amazon's acquisition of the Washington Post in 2013. The Washington Post is one of the most famous newspapers in the United States. Jeff Bezos, who founded Amazon.com, paid $250 million for the newspaper, reported the Wall Street Journal.

The deal showed "the newspaper industry's economic decline and the shift of power from old media to Silicon Valley," according to the Wall Street Journal.

Last week, the Las Vegas Review-Journal, the largest newspaper in Nevada, was sold for $140 million. Billionaire Sheldon Adelson, who owns casinos and is a major donor to the Republican party, bought the paper.

The Review-Journal has a conservative slant that "aligns with Republicans far more often than Democrats," reported the Washington Post. The paper also has "outsize political influence" in Nevada, according to the New York Daily News.

Mary Gotschall adapted this story for Learning English from a variety of sources. Kathleen Struck was the editor.

newspaper – n. a set of large sheets of paper that have news stories, information about local events, advertisements, etc., and that are folded together and sold every day or every week

outlay – n. an amount of money that is spent

frayed – v. to cause (a cloth or other material) to become worn down at the end or edge : to separate the threads of (a material)

intolerant – adj. not willing to allow some people to have equality, freedom, or other social rights