Update Required To play the media you will need to either update your browser to a recent version or update your Flash plugin.
By VOA
13 November, 2015

It is the largest online shopping day in the world.

Online sales from last year increased 60 percent, according to Alibaba. Most people shopped on mobile devices, said the firm. The numbers are preliminary and unaudited, the company said. 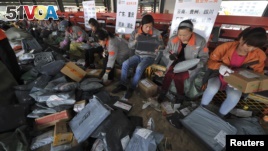 China Singles' Day takes place November 11, or 11.11 each year. Alibaba promoted it as a shopping day in 2009. There are steep discounts and other promotions designed to attract online customers.

Kitty Fok is China manager for market research from IDC. She told the BBC that online shopping had become a comfortable channel for most consumers.

"China is a big market with close to one billion smart, connected device users. It is good news for both Alibaba and their competitors," she said.

Jack Ma is Alibaba's founder and executive chairman. He told journalists in Beijing that the event's annual growth in the future should be more than 50 percent.

The company is focusing on international e-commerce for future Singles' Days, reported Reuters.

"Within the next five years, we expect China will become the world's largest e-commerce market for imported products," President Michael Evans told reporters on Wednesday.

Alibaba Chief Executive Daniel Zhang said in a statement that Singles' Day would mean that "the whole world will witness the power of Chinese consumption."

Mary Gotschall adapted this story for Learning English. Kathleen Struck was the editor.

transactions – n. a business deal : an occurrence in which goods, services, or money are passed from one person, account, etc., to another

preliminary – adj. coming before the main part of something

unaudited – v. not conducting a complete and careful examination of the financial records of a business or person

discounts – n. an amount taken off a regular price : a price reduction

promotions – n. the act of promoting someone or something

sensation – n. someone or something that causes a lot of excitement and interest

channel – n. a system used for sending something (such as information or supplies) from one place or person to another