Update Required To play the media you will need to either update your browser to a recent version or update your Flash plugin.
By Ashley Thompson
01 August, 2018

All 103 passengers and crew members have survived a plane crash in Mexico.

The Aeromexico-operated jet had just taken off Tuesday in the Mexican state of Durango when it smashed into the ground near the runway. All the people on board survived the crash and were able to escape before the plane fully caught fire. 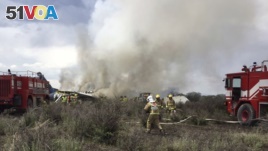 Rescue workers and firefighters are seen at the site where an Aeromexico airliner has suffered an "accident" in a field near the airport of Durango, Mexico, Tuesday, July 31, 2018. (Civil Defense Office of Durango Photo via AP)

Nearly everyone suffered some injuries, Mexican officials say. Most of the injuries were minor. But the pilot and one young passenger remain in critical condition.

Some of the survivors have posted pictures and videos on social media. Twitter user Ashley Garcia posted a video she took right before and during the crash. People can be heard shouting in fear. The video also shows the passengers walking away from the fiery plane after they escaped.

Another survivor tweeted that it was the "scariest moment of my life... never thought this would happen to me."

Alberto Herrera of Chicago, Illinois, was on the plane. He told the Associated Press that a strong burst of wind and hail hit the plane and pushed it back to the ground.

"The higher up we went into the storm the heavier the hail got and more wind got to us," he said. "Then all of a sudden the plane starts rocking and it starts seriously, seriously moving around and then hitting the ground."

Herrera and other survivors said the plane burst into flames right after it hit the ground.

"We felt the flames coming quickly...there was a lot of smoke," Jaquelin Flores told the newspaper El Sol.

Romulo Campuzano, the head of a political party in Durango state, told Foro TV that both wings were on fire as he and other passengers escaped from the plane.

Officials say it is too early to say what caused the crash, but investigators are expected to look into wind shear as a possibility. That is when there is a difference in the speed or direction of wind over a short distance in the atmosphere.

Aeromexico chief Andres Conesa described the day as "very difficult" and credited the timely reaction of crew and passengers for their survival.

Ashley Thompson adapted this story based on reports from the Associated Press and Reuters. Kelly Jean Kelly was the editor.

jet - n. a fast airplane that has one or more jet engines

runway - n. a long strip of ground where airplanes take off and land

hail - n. pieces of ice that fall from clouds like rain

flames - n. the hot, glowing gas that can be seen when a fire is burning