Also, Too and As Well

Update Required To play the media you will need to either update your browser to a recent version or update your Flash plugin.
By VOA
15 February, 2019


Today on Ask a Teacher, a reader from Brazil asks about two common adverbs. Here is his question:

Hello from Brazil! Teacher, could you explain to us how and when to use "as well" and "too"? Obrigado! – Luan Garcia, Brazil

Let me start with when to use them.

"Too" is the most informal but is often the best choice when speaking American English.

"As well" is a little more formal than "too" and less common in American spoken English. Many Americans do use it in writing, however.

"Also" is generally more common in writing than speech.

Now let's examine how they are used.

"Too" and "as well" usually come at the end of sentences. Listen to a short exchange:

Jerome is going to Mardi Gras.

I'm going to Mardi Gras, too!

The person could use "as well," although it sounds somewhat formal: 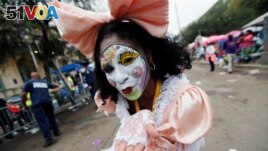 A member of the New Orleans Baby Doll Ladies walks down St. Charles Avenue ahead of the Zulu Parade during Mardi Gras in New Orleans, Feb. 28, 2017.

The word "also" can appear many places in a sentence or clause. Here are a few.

At the start of a sentence, it can be used to present a new subject:

We're so excited. Also, we brought a surprise.

But more often "also" appears in other positions, such as before the main verb:

We're so excited. We also brought a surprise.

I am also really excited.

Lastly, none of these adverbs are used in negative statements. Instead, use the word "either" or "neither."

I can't go to Mardi Gras this year.

That's sad. Neither can I.

And, one small note about "too:" It has a second meaning but that will be a subject for another day!

Do you have a question for Ask a Teacher? Write to us in the comments area and tell us your name and country. If you would like, you can also tell us one thing about yourself.

adverb – n. a word that is often used to show time, manner, place or degree

informal – adj. not suited for serious or official speech and writing

Mardi Gras – n. the Tuesday before the beginning of Lent that is often celebrated with parades and parties

excite – adj. very enthusiastic and eager about something