Update Required To play the media you will need to either update your browser to a recent version or update your Flash plugin.
By Rachel Dennis
19 January, 2018


The online seller Amazon has announced a list of 20 possible places where the company might build a second headquarters.

Included on the list is the city of Toronto in the Canadian Province of Ontario. 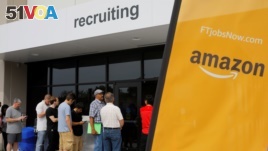 FILE - Job seekers line up to apply during "Amazon Jobs Day," a job fair being held at 10 fulfillment centers across the United States aimed at filling more than 50,000 jobs, at the Amazon.com Fulfillment Center in Fall River, Massachusetts, Aug. 2, 2017.

Thursday's announcement comes four months after the company first started accepting bids. The list, which was cut down from a total of 238 areas, includes major cities such as Chicago, New York City and Washington D.C. Smaller cities such as Raleigh, North Carolina and Columbus, Ohio were also included.

In the Northeast, Boston; Newark, New Jersey; Philadelphia and Pittsburg were selected as possible choices. Montgomery County, Maryland and Northern Virginia; and the southern cities of Atlanta; Austin and Dallas, Texas; Nashville, Tennessee; and Miami are up for consideration.

Amazon's announcement marks the beginning of a competition between the bidders.

"HQ2" is expected to bring in billions of dollars in both revenue and secondary investment.

Amazon's plan for expansion shows the influence technology companies have on the economy.

Some of the competing bidders have publically announced their plans to provide Amazon with billions of dollars in reduced taxes if they are chosen.

Jason Lary, the mayor of Stonecrest, Georgia, near Atlanta, has proposed using 140 hectares of land in his town to create a new city he called Amazon. Lary said Amazon's chief executive officer, Jeff Bezos, can be the city's mayor for life.

New Jersey has offered Amazon $7 billion in tax reductions if Newark is chosen as the future site for "HQ2."

Amazon officials say they expect to make a decision sometime this year. The company plans to hold discussions with all 20 bidders about the project.

Rachel Dennis adapted it for VOA Learning English from a Reuters story. Mario Ritter was the editor.

revenue- n. the money being made by a company

generate –v. to cause something to be created or produced

bid –n. an offer of money for whatever is being sold

campus –n. the area and buildings around a university, college, school or technology company