Update Required To play the media you will need to either update your browser to a recent version or update your Flash plugin.
By Bryan Lynn
03 December 2022

The data found the rainforest lost an area covering over 11,000 square kilometers in the period from August 2021 to July 2022.

That was down 11 percent from the previous year when more than 13,000 square kilometers were destroyed. 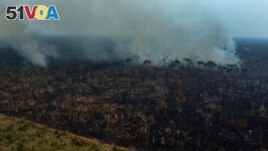 The data was recently released by Brazil's National Institute for Space Research. The agency is part of the country's Ministry of Science. The institute uses a monitoring system that collects satellite images of the rainforest to measure deforestation rates.

For a period of more than 10 years, improvements were seen in the Brazilian Amazon. Deforestation rates dropped and stayed below 10,000 square kilometers a year. But that changed in January 2019, when far-right President Jair Bolsonaro took office.

Part of the destruction that took place under Bolsonaro will not appear until next year's report, including the important period from August to October 2022.

A different federal satellite monitoring system shows deforestation rose 45 percent during the August to October period. But while that system provides faster results, it is not as accurate as the other methods, The Associated Press reports.

Traditionally, the August to October period sees higher rates of deforestation because it is during the dry season.

An examination of new data was also completed by the Climate Observatory, a collection of environmental groups. It showed that during the four years of Bolsonaro's leadership, deforestation rose 60 percent over the previous four years. That is the largest percentage rise under a president since satellite monitoring began in 1998.

In one state, Para, deforestation dropped 21 percent. But it still represented one-third of all Brazil's Amazon forest loss. Part of the tree cutting and burning happens in areas that are supposed to be protected. One such area is Paru State Forest, where the nonprofit Amazon Institute of People and the Environment registered 2 square kilometers of deforestation in October alone.

"In recent years, deforestation has reached protected areas where previously there was almost no destruction," said Jakeline Pereira, a researcher with the Amazon Institute. Pereira told the AP, "In Paru's region, the destruction is driven by lease of land for soybean crops and cattle."

Bolsonaro's administration has been blamed for weakening environmental agencies and supporting legislative measures to ease land protections in favor of economic development.

Brazilian President-elect da Silva recently promised cheering crowds at the U.N. climate conference in Egypt to end all deforestation across the whole country by 2030. "There will be no climate security if the Amazon isn't protected," he said.

The last time da Silva was president, from 2003 to 2010, deforestation fell sharply. On the other hand, he backed measures that set in motion destruction in the long run. These included his support for the huge Belo Monte hydroelectric dam project and providing large loans to the beef industry. Cutting down forest to create feeding areas for cattle is a main driver of deforestation.

The Amazon rainforest covers an area twice the size of India. It acts as a buffer against climate change by taking in large amounts of carbon dioxide. It is also the most biodiverse forest in the world, and the home of tribes that have lived in the area for thousands of years.

monitor – v. watch something carefully and record the results

lease – v. to permit someone to use a piece of land in exchange for money

buffer – n. something that helps protect someone or something from harm

biodiverse – adj. having many different kinds of plants and animals