Update Required To play the media you will need to either update your browser to a recent version or update your Flash plugin.
By Dan Friedell
26 May 2021

The deal has some observers concerned that a few media companies are getting too big.

Metro-Goldwyn-Mayer, known as MGM, started making movies in 1924, before films had sound. The movie production company created well-known movies that include Gone With the Wind and The Wizard of Oz. But it no longer owns the rights to those films. 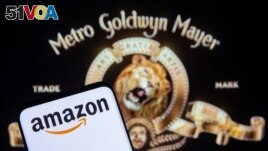 Smartphone with Amazon logo is seen in front of displayed MGM logo in this illustration taken, May 26, 2021. (REUTERS/Dado Ruvic/Illustration)

MGM also shares ownership of the James Bond action movies. The release of the latest film in the series, No Time to Die, has been delayed by the coronavirus health crisis.

In addition to films, MGM also produces television shows including Shark Tank and The Real Housewives of Beverly Hills.

The movie studio has been for sale for a number of years and sought legal protection from its creditors in 2010 after having financial problems.

Observers say Amazon is trying to compete with other large media and entertainment companies like Netflix and Disney.

Earlier this month, AT&T and Discovery, owner of the Discovery Channel, said they would seek to form a new company that includes CNN, the Food Network and HBO.

Amazon already has its own movie studio. But it is looking for more movies and shows to offer its Amazon Prime subscribers through online streaming.

Some successful Amazon television shows and movies include The Marvelous Mrs. Maisel, Fleabag and The Sound of Metal, which recently won Academy Awards.

Amazon is also developing a television version of the Lord of the Rings movies and books.

However, the U.S. and other governments are concerned some media companies are getting too big and pushing out competitors. A report from the U.S. House of Representatives last year suggested that Amazon and other large, influential companies should be broken up.

Joseph Pisani wrote this story for The Associated Press. Dan Friedell adapted it for Learning English. Mario Ritter, Jr. was the editor.

Do you think Amazon is getting too big? Tell us in the Comments Section and visit 51VOA.COM.

studio - n. a company that makes movies or television shows

subscriber- n. someone who pays money to get a publication or service regularly

streaming –n. material that plays continuously as data is sent from a computer over the internet