Update Required To play the media you will need to either update your browser to a recent version or update your Flash plugin.
By Jonathan Evans
20 June 2022


Online services company Amazon recently announced that customers in Lockeford, California in the United States would be among the first to receive drone deliveries later this year.

This would be the first time Amazon makes drone deliveries available to the public. The move follows other drone delivery programs tested by companies such as Walmart, the United Parcel Service and FedEx.

Amazon said it was working with Federal Aviation Administration and city officials for permits. 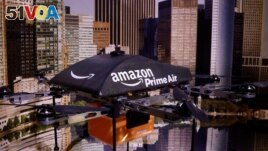 The drones will have the ability to fly beyond-line-of-sight. That means they can operate beyond the normal sight of the drone pilot. The drones will be programmed to drop deliveries at the homes of customers in Lockeford. The town has a population of about 4,000 people.

Amazon has been working toward drone delivery for years, but it has been slowed by regulatory issues. Back in December 2013, the company's chief and founder Jeff Bezos said that drones would be flying purchases to people's homes within five years.

In 2019, Amazon produced self-piloting drones that are fully electric and can carry about 2.2 kilograms of goods. The drones are designed to deliver goods within 30 minutes of purchase by dropping them in a customer's backyard.

Amazon made its first delivery by drone in Britain in 2016.

Jonathan Evans adapted this story for Learning English based on a report from the Reuters news service.

customer - n. a person who buys from or uses the services of a company especially regularly

drone - n. an unmanned aircraft or ship guided by remote control or onboard computers

delivery - n. the transfer of something from one place or person to another