Amazon Reaches for the Stars

Update Required To play the media you will need to either update your browser to a recent version or update your Flash plugin.
By Anne Ball
16 September, 2018


The American company Amazon.com is one of the biggest businesses in the United States and around the world. Now, the company is said to be negotiating with the government in Chile on a plan to reach for the stars.

The Reuters news agency reports that Amazon hopes to store and use information collected by huge space telescopes in the South American nation.

Amazon is in talks with Chilean officials to store and mine what is called astrodata -- information gathered by the telescopes. If an agreement is reached, the company may be able to use the information to develop artificial intelligence (AI) tools.

Chile's government recently announced plans to combine data from all its telescopes and store it in a "cloud" computing system. This means the information would be stored over the internet instead of a computer hard drive.

The government has yet to provide details of the astrodata possibilities. It did not say which companies might operate the computing cloud.

Amazon has been talking with Chile for two years about a possible data center. An official at InvestChile said such a center would provide services for local businesses and the government to store information on the cloud.

American astronomer Chris Smith said the negotiations have included talk about the possibility of Amazon Web Services (AWS) storing astrodata. Smith was involved in email exchanges between AWS and Chilean officials over the past six months. At the time, Smith was with AURA observatory, which leads three of the U.S. financed telescope projects in Chile.

Amazon Web Service's Jeffrey Kratz has met with Chilean President Sebastian Pinera. Kratz confirmed the company's interest in astrodata, but said that, for now, Amazon was making no announcements.

"Chile is a very important country for AWS," he said in an email. "We kept being amazed about the incredible work on astronomy and the telescopes," Kratz wrote. He said the Chilean telescopes "can benefit from the cloud" by easing the difficulty of dealing with information technology. 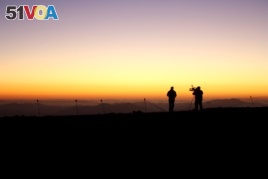 Members of the media work during the opening ceremony of the construction of The Giant Magellan Telescope (GMT) at Las Campanas hill near Vallenar town, Chile, Nov. 11, 2015.

Northern Chile is known for having clear skies, not much rain, and large areas without bright city lights. This makes it a perfect place to observe the night sky. Because of this, seventy percent of the money spent on astronomy in the world goes to Chile.

Many of the world's most powerful telescopes operate in Chile's Atacama Desert, the driest desert on earth. Chris Smith said that within five years, three of the world's four next-generation billion-dollar telescopes will be in the South American country.

Powerful telescopes produce large amounts of information about the universe. If a deal between Chile and Amazon is reached, AWS's cloud computing program could help.

Economy Ministry officials are leading Chili's effort to store astrodata in the cloud. They said there are ways such data could help with more Earth-bound issues.

One ministry official, Julio Pertuze, said tools developed for the astrodata project could have other uses, such as identifying persons stealing goods from stores or helping to protect endangered animals.

Pertuze spoke at an event announcing Chile's aim to build a virtual observatory on the cloud.

Amazon's founder and leader Jeff Bezos is known for his interest in space. His company already provides a cloud platform for data from the Hubble Telescope and the International Centre for Radio Astronomy Research in Australia.

As Amazon explores the possibilities in Chile's astrodata, another technology company, Google, is already a member of Chile's Large Synoptic Survey Telescope. It will be fully operational in 2022. Google also has a data center established in the country.

Just last month, crews started work on the telescope at Las Campanas Observatory in Chile. The Giant Magellan Telescope is expected to give humans a view of the edge of the universe. The project will cost $1 billion to complete.

The huge device will have seven round mirrors that will be 24 meters around. The telescope and its computer will make the Giant Magellan Telescope 10 times as accurate as the American space agency's Hubble Space Telescope.

The Giant Magellan Telescope should be ready for use in 2024. Scientists hope to be able to collect more light than any telescope ever built. They hope they will be able to see all the way back to the earliest days of the universe.

Anne Ball wrote this story for VOA Learning English with information from the Reuters news agency. George Grow was the editor. We want to hear from you. Write to us in the Comments Section and visit us on 51VOA.COM.

mine - v. to search for something valuable

benefit - n. to be helped by something

virtual observatory - n. an observatory that exists or occurs computers or on the Internet

view - n. the things that can be seen from a particular place

mirror - n. a piece of glass that reflects images