The Ambitious Guest by Nathaniel Hawthorne

Update Required To play the media you will need to either update your browser to a recent version or update your Flash plugin.
By Dona de Sanctis
01 January 2021


Our story today is called "The Ambitious Guest. " It was written by Nathaniel Hawthorne. Here is Harry Monroe with our story.

One December night, a long, long time ago, a family sat around the fireplace in their home. A golden light from the fire filled the room. The mother and father laughed at something their oldest daughter had just said. The girl was seventeen, much older than her little brother and sister, who were only five and six years old. 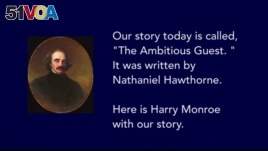 The Ambitious Guest by Nathaniel Hawthorne

A very old woman, the family's grandmother, sat knitting in the warmest corner of the room. And a baby, the youngest child, smiled at the fire's light from its tiny bed. This family had found happiness in the worst place in all of New England. They had built their home high up in the White Mountains, where the wind blows violently all year long.

The family lived in an especially cold and dangerous spot. Stones from the top of the mountain above their house would often roll down the mountainside and wake them in the middle of the night. No other family lived near them on the mountain. But this family was never lonely. They enjoyed each other's company, and often had visitors. Their house was built near an important road that connected the White Mountains to the Saint Lawrence River.

People traveling through the mountains in wagons always stopped at the family's door for a drink of water and a friendly word. Lonely travelers, crossing the mountains on foot, would step into the house to share a hot meal. Sometimes, the wind became so wild and cold that these strangers would spend the night with the family. The family offered every traveler who stopped at their home a kindness that money could not buy.

On that December evening, the wind came rushing down the mountain. It seemed to stop at their house to knock at the door before it roared down into the valley. The family fell silent for a moment. But then they realized that someone really was knocking at their door. The oldest girl opened the door and found a young man standing in the dark.

The old grandmother put a chair near the fireplace for him. The oldest daughter gave him a warm, shy smile. And the baby held up its little arms to him. "This fire is just what I needed," the young man said. "The wind has been blowing in my face for the last two hours."

The father took the young man's travel bag. "Are you going to Vermont?" the older man asked. "Yes, to Burlington," the traveler replied. "I wanted to reach the valley tonight. But when I saw the light in your window, I decided to stop. I would like to sit and enjoy your fire and your company for a while."

As the young man took his place by the fire, something like heavy footsteps was heard outside. It sounded as if someone was running down the side of the mountain, taking enormous steps. The father looked out one of the windows.

"That old mountain has thrown another stone at us again. He must have been afraid we would forget him. He sometimes shakes his head and makes us think he will come down on top of us," the father explained to the young man. "But we are old neighbors," he smiled. "And we manage to get along together pretty well. Besides, I have made a safe hiding place outside to protect us in case a slide brings the mountain down on our heads."

As the father spoke, the mother prepared a hot meal for their guest. While he ate, he talked freely to the family, as if it were his own. This young man did not trust people easily. Yet on this evening, something made him share his deepest secret with these simple mountain people.

The young man's secret was that he was ambitious. He did not know what he wanted to do with his life, yet. But he did know that he did not want to be forgotten after he had died. He believed that sometime during his life, he would become famous and be admired by thousands of people. "So far," the young man said, "I have done nothing. If I disappeared tomorrow from the face of the earth, no one would know anything about me. No one would ask 'Who was he. Where did he go?' But I cannot die until I have reached my destiny. Then let death come! I will have built my monument!"

The young man's powerful emotions touched the family. They smiled. "You laugh at me," the young man said, taking the oldest daughter's hand. "You think my ambition is silly." She was very shy, and her face became pink with embarrassment. "It is better to sit here by the fire," she whispered, "and be happy, even if nobody thinks of us."

Her father stared into the fire. "I think there is something natural in what the young man says. And his words have made me think about our own lives here. "It would have been nice if we had had a little farm down in the valley. Some place where we could see our mountains without being afraid they would fall on our heads. I would have been respected by all our neighbors. And, when I had grown old, I would die happy in my bed. You would put a stone over my grave so everyone would know I lived an honest life."

"You see!" the young man cried out. "It is in our nature to want a monument. Some want only a stone on their grave. Others want to be a part of everyone's memory. But we all want to be remembered after we die!" The young man threw some more wood on the fire to chase away the darkness.

The firelight fell on the little group around the fireplace: the father's strong arms and the mother's gentle smile. It touched the young man's proud face, and the daughter's shy one. It warmed the old grandmother, still knitting in the corner. She looked up from her knitting and, with her fingers still moving the needles, she said, "Old people have their secrets, just as young people do."

The old woman said she had made her funeral clothes some years earlier. They were the finest clothes she had made since her wedding dress. She said her secret was a fear that she would not be buried in her best clothes. The young man stared into the fire. "Old and young," he said. "We dream of graves and monuments. I wonder how sailors feel when their ship is sinking, and they know they will be buried in the wide and nameless grave that is the ocean?"

A sound, rising like the roar of the ocean, shook the house. Young and old exchanged one wild look. Then the same words burst from all their lips. "The slide! The slide!" They rushed away from the house, into the darkness, to the secret spot the father had built to protect them from the mountain slide. The whole side of the mountain came rushing toward the house like a waterfall of destruction.

But just before it reached the little house, the wave of earth divided in two and went around the family's home. Everyone and everything in the path of the terrible slide was destroyed, except the little house. The next morning, smoke was seen coming from the chimney of the house on the mountain. Inside, the fire was still burning. The chairs were still drawn up in a half circle around the fireplace. It looked as if the family had just gone out for a walk.

Some people thought that a stranger had been with the family on that terrible night. But no one ever discovered who the stranger was. His name and way of life remain a mystery. His body was never found.

fireplace - n. a specially built place in a room where a fire can be built

knit - v. to make a piece of clothing from yarn or thread by using long needles or a special machine

shy - adj. showing that you are nervous and uncomfortable about meeting and talking to people

ambitious - adj. having ambition; having a desire to be successful, powerful or famous

admire - v. to feel respect or approval for someone or something

monument - n. a building, statue, etc., that honors a person or event