'The Boarded Window' by Ambrose Bierce

Update Required To play the media you will need to either update your browser to a recent version or update your Flash plugin.
By VOA
21 May 2021


Our story today is called "The Boarded Window." It was written by Ambrose Bierce. Here is Shep O'Neal with the story.

In 1830, only a few miles away from what is now the great city of Cincinnati, Ohio, lay a huge and almost endless forest.

The area had a few settlements established by people of the frontier. Many of them had already left the area for settlements further to the west. But among those remaining was a man who had been one of the first people to arrive there. 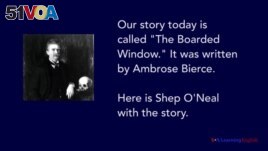 The Boarded Window by Ambrose Bierce

He lived alone in a house of logs surrounded on all sides by the great forest. He seemed a part of the darkness and silence of the forest, for no one had ever known him to smile or speak an unnecessary word. His simple needs were supplied by selling or trading the skins of wild animals in the town.

His little log house had a single door. Directly opposite was a window. The window was boarded up. No one could remember a time when it was not. And no one knew why it had been closed. It surely was not because of the man's dislike of light and air. Sometimes, he could be seen lying in the sun on his doorstep. I imagine there are few people living today who ever knew the secret of that window. But I am one, as you shall see.

The man's name was said to be Murlock. He appeared to be seventy years old, but he was really fifty. Something other than years had been the cause of his aging.

His hair and long, full beard were white. His gray, lifeless eyes were sunken. His face was wrinkled. He was tall and thin with drooping shoulders—like someone with many problems.

I never saw him. These details I learned from my grandfather. He told me the man's story when I was a boy. He had known him when living nearby in that early day.

One day Murlock was found in his cabin, dead. It was not a time and place for medical examiners and newspapers. I suppose it was agreed that he had died from natural causes or I should have been told, and should remember.

I know only that the body was buried near the cabin, next to the burial place of his wife. She had died so many years before him that local tradition noted very little of her existence.

That closes the final part of this true story, except for the incident that followed many years later. With a fearless spirit I went to the place and got close enough to the ruined cabin to throw a stone against it. I ran away to avoid the ghost which every well-informed boy in the area knew haunted the spot.

But there is an earlier part to this story supplied by my grandfather.

When Murlock built his cabin he was young, strong and full of hope. He began the hard work of creating a farm. He kept a gun--a rifle—for hunting to support himself.

He had married a young woman, in all ways worthy of his honest love and loyalty. She shared the dangers of life with a willing spirit and a light heart. There is no known record of her name or details about her. They loved each other and were happy.

One day Murlock returned from hunting in a deep part of the forest. He found his wife sick with fever and confusion. There was no doctor or neighbor within miles. She was in no condition to be left alone while he went to find help. So Murlock tried to take care of his wife and return her to good health. But at the end of the third day she fell into unconsciousness and died.

From what we know about a man like Murlock, we may try to imagine some of the details of the story told by my grandfather.

When he was sure she was dead, Murlock had sense enough to remember that the dead must be prepared for burial. He made a mistake now and again while performing this special duty. He did certain things wrong. And others which he did correctly were done over and over again.

He was surprised that he did not cry — surprised and a little ashamed. Surely it is unkind not to cry for the dead.

"Tomorrow," he said out loud, "I shall have to make the coffin and dig the grave; and then I shall miss her, when she is no longer in sight. But now -- she is dead, of course, but it is all right — it must be all right, somehow. Things cannot be as bad as they seem."

He stood over the body of his wife in the disappearing light. He fixed the hair and made finishing touches to the rest. He did all of this without thinking but with care. And still through his mind ran a feeling that all was right -- that he should have her again as before, and everything would be explained.

Murlock had no experience in deep sadness. His heart could not contain it all. His imagination could not understand it. He did not know he was so hard struck. That knowledge would come later and never leave.

Deep sadness is an artist of powers that affects people in different ways. To one it comes like the stroke of an arrow, shocking all the emotions to a sharper life. To another, it comes as the blow of a crushing strike. We may believe Murlock to have been affected that way.

Soon after he had finished his work he sank into a chair by the side of the table upon which the body lay. He noted how white his wife's face looked in the deepening darkness. He laid his arms upon the table's edge and dropped his face into them, tearless and very sleepy.

At that moment a long, screaming sound came in through the open window. It was like the cry of a lost child in the far deep of the darkening forest! But the man did not move. He heard that unearthly cry upon his failing sense, again and nearer than before. Maybe it was a wild animal or maybe it was a dream. For Murlock was asleep.

Some hours later, he awoke, lifted his head from his arms and listened closely. He knew not why. There in the black darkness by the side of the body, he remembered everything without a shock. He strained his eyes to see -- he knew not what.

His senses were all alert. His breath was suspended. His blood was still as if to assist the silence. Who — what had awakened him and where was it!

Suddenly the table shook under his arms. At the same time he heard, or imagined he heard, a light, soft step and then another. The sounds were as bare feet walking upon the floor!

He was afraid beyond the power to cry out or move. He waited—waited there in the darkness through what seemed like centuries of such fear. Fear as one may know, but yet live to tell. He tried but failed to speak the dead woman's name. He tried but failed to stretch his hand across the table to learn if she was there. His throat was powerless. His arms and hands were like lead.

Then something most frightful happened. It seemed as if a heavy body was thrown against the table with a force that pushed against his chest. At the same time he heard and felt the fall of something upon the floor. It was so violent a crash that the whole house shook. A fight followed and a confusion of sounds impossible to describe.

Murlock had risen to his feet. Extreme fear had caused him to lose control of his senses. He threw his hands upon the table. Nothing was there!

There is a point at which fear may turn to insanity; and insanity incites to action. With no definite plan and acting like a madman, Murlock ran quickly to the wall. He seized his loaded rifle and without aim fired it.

The flash from the rifle lit the room with a clear brightness. He saw a huge fierce panther dragging the dead woman toward the window. The wild animal's teeth were fixed on her throat! Then there was darkness blacker than before, and silence.

When he returned to consciousness the sun was high and the forest was filled with the sounds of singing birds. The body lay near the window, where the animal had left it when frightened away by the light and sound of the rifle.

The clothing was ruined. The long hair was in disorder. The arms and legs lay in a careless way. And a pool of blood flowed from the horribly torn throat. The ribbon he had used to tie the wrists was broken. The hands were tightly closed.

And between the teeth was a piece of the animal's ear.

"The Boarded Window" was written by Ambrose Bierce. It was adapted by Lawan Davis who was also the producer. The storyteller was Shep O'Neal.

Now it's your turn to use the words in this story. What do you think it would be like to live all alone in the woods? What kinds of scary stories are famous in your country?Let us know in the comments section or on 51VOA.COM.

doorstep – n. a step or series of steps leading up to one of the doors that is used to enter or leave a building

lifeless – adj. Having no life

rifle – n. A gun that has a long barrel and that is held against your shoulder when you shoot it

unconscious – adj. not awake especially because of an injury, drug, etc.