America: A Nation of Redaction

Update Required To play the media you will need to either update your browser to a recent version or update your Flash plugin.
By Hai Do
20 April, 2019


Today, a different kind of Words and Their Stories - an examination of the word redaction.

This week, United States Attorney General William Barr released the long-awaited report by special counsel Robert Mueller. The report presents the findings of Mueller's investigation into possible collusion between the presidential campaign of Donald Trump and Russia. It also aimed to answer whether Trump tried to obstruct justice during the investigation.

The 400-page report, however, includes "redactions." And Congress is prepared to fight the administration to get a complete "un-redacted" report released to the public.

Dictionary publisher Merriam-Webster defines the verb "redact" as "to select or adapt (as by...removing sensitive information) for publication or release."

The publisher said searches for the words "redact, redacted and redaction" increased 4,000 percent on March 29. The rise in searches followed Barr's letter to Congress on the Mueller report. In the letter, Barr wrote that he was "preparing the report for release, making the redactions that are required."

Barr said the "redactions" are needed to protect grand jury material, classified intelligence, ongoing investigations and the privacy rights of others. 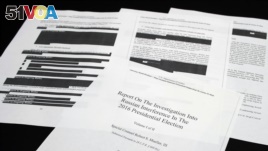 The U.S. government has "redacted" things from the most sensitive information to the most harmless facts throughout history.

Tom Blanton is with the National Security Archive, an organization that calls for open government. He told the Associated Press, "We believe there are real secrets, common-sense secrets, like names of people in the field who would be killed or specifications of weapons of systems."

Blanton noted that the U.S. government "redacted" information on intelligence files for Chilean dictator Augusto Pinochet, who was accused of human rights abuses. In 2003, the Defense Intelligence Agency released documents that included Pinochet's life story. Some information, however, was "redacted" for national security.

David Cole is legal director of the American Civil Liberties Union. He said any government official with a security clearance would want to "redact" some information.

The need for "redaction" is as old as the country itself.

In 1787, America's founding fathers met in Pennsylvania to draft the nation's Constitution behind closed doors. They wanted to speak freely and keep some information from the public.

No official papers were kept on the debate, so there was nothing to "redact." And James Madison's personal notes of the meeting did not come out until 1836, after Madison and other delegates were dead.

"I think they are pretty reliable," historian Gordon Wood said of Madison's notes. "But they may only account for a fraction of what was said at the convention."

At the end of World War II, the U.S. became a superpower. The amount of "redacted" documents grew with the establishment of the Central Intelligence Agency and the National Security Council.

Tim Weiner wrote "Legacy of Ashes: The History of the CIA." He said, "In 1947, when you have creation of the CIA and the NSC, you have the production of literally billions of papers and billions of secrets contained within them."

In the years since, U.S. intelligence and other agencies have "redacted" some unlikely information from the public. The list includes:

Hai Do adapted this story for Learning English based on Associated Press reports with additional materials from Merriam Webster and Department of Justice. Ashley Thompson was the editor.

collusion - n. secret cooperation for an illegal or dishonest purpose

fraction - n. a part of something

sympathy - n. a feeling of support for something