Update Required To play the media you will need to either update your browser to a recent version or update your Flash plugin.
By John Russell
01 January 2022


A small, but growing, movement is trying to find a way to deal with the problem of diabetes in the United States. This movement is made up of special programs, doctors, hospitals and health officials that are concerned about increasing evidence that the food system in the United States is making people sick. The food system has made it easier and less costly for people to eat too many processed foods.

A Reuters news agency report earlier this year suggested that diabetes represents a major public health failure in the United States. The number of Americans with the disease has grown quickly in recent decades even though spending on new treatments has increased as well.

Diet, or the foods that people eat, plays an important part in the life and health of people with diabetes, yet it is rarely dealt with in the U.S. healthcare system. Government programs, insurers and medical providers spend billions of dollars on costly medications, operations and medical devices to treat patients. 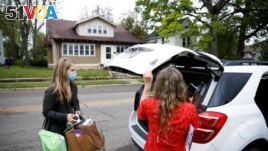 Devon Klatell is the Rockefeller Foundation's managing director of food initiatives. Klatell said that the U.S. has "under-invested," meaning not spent enough time and effort, "in food and nutrition within the healthcare sector." She added, "There is overwhelming evidence that our food system is making lots of us sick."

Poor diets, along with less active lifestyles, are directly linked to type 2 diabetes, the most common form of the disease. Highly processed foods full of sugars and fats play a part in the high blood sugar levels and obesity that often lead to type 2. Of the estimated 34 million Americans with diabetes, about 95 percent are type 2. About 1.6 million Americans have type 1 diabetes, an autoimmune disease of unknown cause that requires lifelong insulin shots.

Unlike type 1 patients, those with type 2 diabetes may be able to manage or reduce the severity of their illness through diet and exercise, greatly reducing the risk of very bad health problems. With the right diet, some may even be able to live without medication.

A small number of special programs seek to make it easier for patients to eat right. These programs take many forms. In Pennsylvania, doctors write diabetes patients prescriptions for healthy food to be filled at food pharmacies that look like small grocery stores. In Santa Barbara, California, a clinic offers bags of fresh food every week to dozens of diabetes patients.

Dr. Namino Glantz is an associate director at the Sansum Diabetes Research Institute, which runs the Farming for Life program in Santa Barbara.

Glantz said, "We can improve people's health as much by offering vegetables as we can in many cases by offering medication."

Dr. Yamini Teegala is chief medical officer at Rocking Horse, a food program. Teegala believes there is a difference between giving drugs and eating healthy foods.

Robin Respaut and Chad Terhune reported on this story for Reuters. John Russell adapted it for Learning English. Susan Shand was the editor.

insulin – n. medical: a substance that your body makes and uses to turn sugar into energy