Update Required To play the media you will need to either update your browser to a recent version or update your Flash plugin.
By Jerilyn Watson
09 November, 2017


November 11 is Veterans Day in the United States. But because Veterans Day falls on a Saturday this year, Friday, November 10 is a federal holiday.

A "veteran" is anyone who has served in the armed forces. Veterans Day honors the living. A separate holiday, Memorial Day in May, honors those who died in military service.

The United States has about 18.5 million veterans. The term veteran is not just for those who have served in wars. It describes anyone who has ever been in the military.

On November 11, communities across the country hold ceremonies and parades to mark Veterans Day. Military bands play. Public officials take part in the events. And soldiers fire guns into the air in a salute to remember those who died in service to their country. 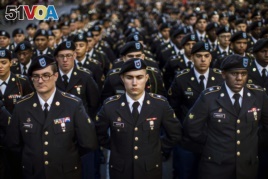 The history of Veterans Day relates to World War I. Many people at the time called it "the war to end all wars."

The United States entered the fighting in Europe in 1917. But the U.S. armed forces were small. So the government began to draft men between the ages of 21 and 31.

The men came from cities and farms. Some were rich. Others were poor. There were doctors, lawyers, businessmen, and college students. Many were married.

The following year, the government expanded the draft. Now it called on men between the ages of 18 and 45. More than 13 million reported for duty.

Many women joined the armed forces, too. Most got office jobs at military bases in the United States. Some, however, went to France to work as nurses in battlefield hospitals.

The following year, President Woodrow Wilson signed a declaration to observe November 11th as Armistice Day in the United States. It would be a day to honor the men and women who had served in the U.S. armed forces during the war.

In 1926, Congress made Armistice Day a national holiday.

But new problems were on the way. Soon, everyone knew that World War I would not be the war to end all wars.

In all, more than 4,000,000 Americans served in the armed forces during the first World War. And 16 million would serve during the second one.

Armistice Day in 1945 was a special day in the United States.

In 1954, Congress decided to change the name of Armistice Day. The holiday became Veterans Day.

Jerilyn Watson wrote this story for Learning English. George Grow was the editor.

draft – v. to choose for some purpose, such as military service

nurse – n. someone who has training to care for sick or injured people

o'clock – adj. used to show position on a close or time piece