Update Required To play the media you will need to either update your browser to a recent version or update your Flash plugin.
By VOA
17 April, 2014

I'm June Simms. Today on the show we go to an art museum in Washington.

American Masters at the Phillips Collection

More than 200 art works by some of America's best artists have returned home to a museum in Washington, D.C. The paintings had been traveling to shows around the world for the last four years. Now they are on exhibit at the Phillips Collection again. Mario Ritter reports.

The exhibit is called "Made in the USA: American Masters from The Phillips Collection." It includes the work of more than 100 American artists. All the paintings were created between 1850 and about 1970.

Museum founder Duncan Phillips collected the artwork from the end of World War l until his death in 1966.

"This show is really an opportunity to bring out artists who are under-recognized." 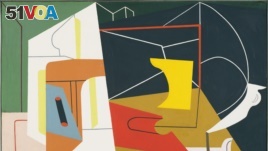 "Egg Beater No. 4, 1928" by Stuart Davis
That is exhibit organizer Susan Frank. She says Duncan Philips bought the works at a time when European artists were more in demand.

"He was determined that he would dedicate this museum to living American artists and lift up American art out of obscurity and give it the same presence that European works were given by his contemporary collectors and other museums."

She says 80 percent of the art in the Philips Collection is American.

The earliest works date from the beginning of the late 19th century and include paintings by such famous artists as Winslow Homer and Arthur B. Davies. The exhibit ends with extraordinary examples of Post-War Abstract Expressionism. The art of this final period uses color and forms not to represent objects but to show emotion and creativity.

"Most well-known of course is his engagement with the abstract American artist Arthur Dove whose work he discovered in the mid-1920s."

Duncan Phillips lent his support to many immigrant artists as well. Susan Frank says he considered their cultural differences as something that expanded the American experience.

"Phillips always believed and championed American art as including all of the world because so many artists were immigrants who came here from being foreign-born, who brought their cultural aesthetics with them and synthesized them with their American experience. He celebrated their approach to their American experience as being something that enriched us."

The museum is hoping that the exhibit will excite people about the wide mix of American art in the first half of the 20th century. It also seeks to educate people about how Duncan Phillips helped lift American modern art to the level of European masterworks of the same time.