Update Required To play the media you will need to either update your browser to a recent version or update your Flash plugin.
By Bryan Lynn
14 April 2022


American businessman Elon Musk has offered to buy Twitter and take the company private. The plans were made public Thursday in a filing Twitter made with the United States Securities and Exchange Commission.

Musk heads the companies Tesla and SpaceX. He has been declared the world's richest person by Forbes magazine, with an estimated worth of $219 billion.

Musk's latest move comes after Twitter recently confirmed that his past investments had already given him a 9.2 percent share in the company. 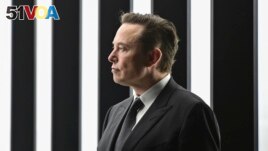 The new filing said Musk had proposed buying the remaining shares of Twitter at $54.20 per share. The offer puts a valuation of the social media company at about $43 billion.

Musk told Twitter his proposed price was his best and final offer. He has not provided any details about financing plans. Musk said if his offer is rejected, he would reconsider his position as a shareholder.

In his government filing, Musk said he invested in Twitter because he believes "in its potential to be the platform for free speech" around the world. He added, however, that he now thinks the only way Twitter can become such a platform is to be "transformed" into a private company.

Twitter said it had received Musk's offer and will decide whether it is in the best interests of shareholders to accept it or continue to operate as a publicly traded company.

Daniel Ives is an industry expert with the investment company Wedbush Securities. He said in a note to clients he believes Twitter will accept Musk's offer, which he called an "aggressive, hostile takeover of the company." Ives added that it would be difficult for any other individual or groups to come forward with a comparable offer.

In the past, Musk has been critical of some of Twitter's policies related to free speech issues. He recently created a poll on Twitter that asked users if they believed the service was committed to permitting free speech for all individuals.

In the latest government filing, Musk said Twitter has great potential and he thinks that he is the right person to "unlock" that potential.

Twitter has not done as well as some other social media companies in recent years. It reported a net loss of $221 million for 2021. The loss was largely tied to a settlement of a lawsuit by shareholders who said the company had misled investors. The shareholders accused the company of misleading them about how much its user base was growing and how much users interacted with its platform.

Twitter co-founder Jack Dorsey resigned as Chief Executive Officer in late November and the position was given to Parag Agrawal.

The Associated Press, Reuters and Agence France-Presse reported on this story. Bryan Lynn adapted the reports for VOA Learning English.

potential – n. a possibility when the necessary conditions exist

platform – n. something that permits someone to tell a large number of people about an idea, product, etc.

transform – v. to change something completely, usuall to improve it

client – n. someone who pays someone else for services or advice

poll – n. a public opinion study in which people are asked or their opinions about a subject or person

net – adj. an amount of money that represents profit