Update Required To play the media you will need to either update your browser to a recent version or update your Flash plugin.
By Christopher Jones-Cruise
29 April, 2017


For many years, American colleges and universities have let people speak on their campuses even if many students do not agree with their beliefs.

College-aged students often do not agree with conservative political beliefs. But school officials believe that letting speeches by conservatives and others take place on campus can help lead to free and open debate.

But recent protests show that beliefs about free speech on college campuses may be changing.

Since February, protests have broken out at colleges across the country -- including the University of California-Berkeley, Middlebury College, the Claremont Colleges, and California State University, Los Angeles.

Some of the protests turned violent. 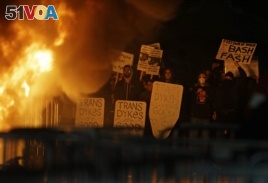 Protestors watch a fire on Sproul Plaza during a rally against the scheduled speaking appearance by Breitbart News editor Milo Yiannopoulos on the University of California at Berkeley campus on Wednesday, Feb. 1, 2017, in Berkeley, Calif.

The protests started because conservative speakers were set to give talks about their beliefs.

Some people have criticized the protesters for trying to prevent controversial speakers from being heard.

Will Creely is the senior vice president of legal and public advocacy at the Foundation for Individual Rights in Education (FIRE). He told VOA that those who support free speech are worried about the protests. He says schools should work harder to protect speakers who may have different political beliefs than many students.

Last month, a student group at Middlebury College in Vermont invited Charles Murray to speak on the campus. Murray is a political scientist and a fellow with the conservative American Enterprise Institute. His research has linked race and intelligence.

Hundreds of protesters shouted as Murray tried to speak. Officials moved him to another building, where he spoke with Professor Allison Stanger. His discussion with her was shown online.

College spokesman Bill Burger says that as Stanger and Murray left the building, they were "physically and violently confronted by a group of protesters" who "set upon [their] car, rocking it, pounding on it, jumping on and trying to prevent it from leaving campus."

Stanger was taken to a hospital. She left wearing a neck brace. She said during the dispute with protesters, one of them grabbed her hair and pulled her backward.

In a message on Facebook, Stanger wrote: "I feared for my life."

Earlier this month, students at Claremont McKenna College in California targeted Heather MacDonald. She is a researcher at the conservative Manhattan Institute and a well-known critic of the Black Lives Matter movement.

Students said they disagreed with a book MacDonald published last year called The War on Cops. In it, MacDonald wrote that police officers are afraid to do their work because of increased attention from reporters following the police shooting of Michael Brown in Ferguson, Missouri in 2014.

Brown, who is black, was killed by a white officer.

A student group invited MacDonald to speak on campus. But protesters stopped her from entering the building where she was to speak. She was forced to instead broadcast her speech on the internet. She did so from a room that was mostly empty; protesters had blocked people from entering.

The protesters hit the room's windows and shouted until MacDonald later said, "the cops decided that things were getting too chaotic and I should stop speaking."

Police officers then had to help MacDonald leave the building so she could safely escape the protesters.

After her speech, more than 20 students signed a letter to David Oxtoby, one of the school's presidents. They called MacDonald a "fascist."

The letter demanded that the university "take action" against an independent student newspaper for its reporting on the protests and for its "continual perpetuation of hate speech."

Oxtoby had previously condemned the protests and defended MacDonald's right to speak on campus. He said the college supports "the exercise of free speech and academic freedom."

The students said MacDonald is a well-known figure and her beliefs have been reported many times by the news media. They said refusing to let her speak did not violate her rights. And they said MacDonald being on campus is "a form of violence."

Creely says incidents like the ones at Middlebury and Claremont are becoming increasingly common at American colleges. He called the trend "deeply troubling."

Creely also criticized university officials for accepting the demands of students. He says the students do not know enough about laws that protect free speech in the United States.

He notes that "there is no hate speech exception to the First Amendment. There is an unfortunately prevalent problem of students being unaware of the extent of their rights and the rights of their peers," he said.

In 2015, the market research group YouGov asked students about free speech. In the opinion study, 43 percent of the students questioned said "making sure that students have an environment free from discrimination, even if that means placing some limits on what students can say," should be more of a concern for colleges than protecting the "absolute right to free speech."

Gallup did a similar study in 2016. It found that 52 percent of students believe their college or university should stop people from speaking on campus who have a history of making hateful comments.

Forty two percent of students did not agree with the statement, however. 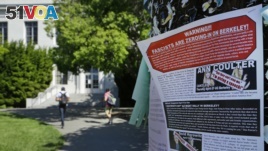 FILE - A leaflet is seen stapled to a message board near Sproul Hall on the University of California, Berkeley in Berkeley, Calif. Students who invited Ann Coulter to speak on campus filed a lawsuit, April 24, 2017, against the university.

The debate about First Amendment rights continued earlier this month when the University of California-Berkeley canceled a planned speech by conservative writer and speaker Ann Coulter.

University officials said they were worried that police would not be able to control a possibly violent reaction to Coulter's speech.

The school's decision to cancel Coulter's speech was criticized by many people. So officials changed their decision. They set a time for her to speak, but the time they set was one during which fewer people would be on campus.

The student group that invited Coulter to speak did not like the plan.

It sued the school on Monday, claiming it was discriminating against Coulter.

Lawyer Harmeet Dhillon and the Berkeley College Republicans said in the lawsuit that "this case arises from efforts by one of California's leading public universities, UC Berkeley, once known as the ‘birthplace of the Free Speech Movement,' to restrict and stifle the speech of conservative students whose voices fall beyond the campus political orthodoxy."

The school said the charge that Coulter is being punished for her political beliefs is "untrue."

The school said it "welcomes speakers of all political viewpoints and is committed to providing a forum to enable Ann Coulter to speak on the Berkeley campus."

Joshua Fatzick wrote this story for VOANews Christopher Jones-Cruise adapted his report for Learning English. Ashley Thomson was the editor.

controversial – adj. relating to or causing much discussion, disagreement, or argument; likely to produce controversy

confront – v. to oppose or challenge (someone) especially in a direct and forceful way

neck brace – n. a device that supports the neck, usually after an injury

chaotic – adj. in a state of complete confusion or disorder

fascist – adj. a person who supports a government that is ruled by a dictator who controls the lives of the people and in which people are not allowed to disagree with the government

perpetuate – v. to cause (something that should be stopped, such as a mistaken idea or a bad situation) to continue

trend – n. a general direction of change; a way of behaving, proceeding, etc., that is developing and becoming more common

prevalent – adj. accepted, done or happening often or over a large area at a particular time; common or widespread

extent – n. used to indicate the degree to which something exists, happens or is true

peer – n. a person who belongs to the same age group or social group as someone else

stifle – v. to stop (someone) from doing or expressing something; to make something difficult or impossible

orthodoxy – n. a belief or a way of thinking that is accepted as true or correct