Update Required To play the media you will need to either update your browser to a recent version or update your Flash plugin.
By Caty Weaver
29 June 2020


The Dixie Chicks changed its name last week, over concerns that it is offensive.

"We want to meet this moment" read a statement on the country music group's website.

Now known as The Chicks, Martie Maguire, Natalie Maines and Emily Strayer are the best-selling female band in the United States. That information comes the Recording Industry Association of America. They have won the Recording Academy's top award – a Grammy -- 13 times. 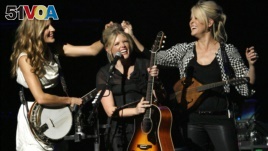 FILE - In this Oct. 18, 2007 file photo, Emily Strayer, left, and Martie Maguire, right, adjust Natalie Maines' hair as the Dixie Chicks perform at the new Nokia Theater in Los Angeles. The group have dropped the word dixie from their name and are now going by The Chicks. (AP)

Dixie is a traditional name for the southern part of the country, especially the rebel states during the Civil War. They fought to defend slavery and states' rights.

The band said it recognized that the new name was already in use by a band in New Zealand.

"A sincere and heartfelt thank you goes out to ‘The Chicks' of NZ" the newly named Chicks said in a statement. "We are honored to co-exist together in the world with these exceptionally talented sisters," the group added.

Next month, the Chicks are to release Gaslighter, their first new record album in 14 years. They just released a music video of their new song, March March. It includes video and images from the recent Black Lives Matter demonstrations.

The name change follows a decision by another group, Lady Antebellum, to change their name earlier this month. They are now known as Lady A. The word antebellum means existing before a war and is often used to describe things before the Civil War.

The former Dixie Chicks formed in Texas in 1989. They have sold more than 33 million albums. Some radio stations stopped playing their music because of an incident in 2003 when lead singer Natalie Maines criticized then-President George W. Bush for the Iraq War. The band was performing overseas at the time. They answered the criticism with the song Not Ready to Make Nice and had a big win at the 2007 Grammys, winning three of the top awards.

band -n. a usually small group of musicians who play popular music together

sincere -adj. having or showing true feelings that are expressed in an honest way

talented -adj. having a special ability to do something well