Update Required To play the media you will need to either update your browser to a recent version or update your Flash plugin.
By Dan Friedell
05 October 2022


Three scientists, one from Denmark, and two from the United States, won the Nobel Prize in Chemistry on Wednesday for their work that has led to improved medicines.

The winners were Carolyn Bertozzi and Barry Sharpless from the U.S. and Morten Meldal from Denmark. They worked together on "click chemistry and bioorthoganal reactions" which are used to make cancer drugs and map DNA.

The work is about "snapping molecules together," said Johan Aqvist, who announced the award in Stockholm, Sweden. He is a member of the Royal Swedish Academy of Sciences. 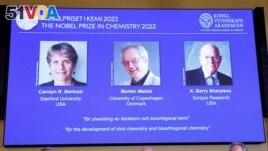 The 81-year-old Sharpless won his second Nobel Prize. Only five people have received the award twice. He also won in 2001.

Aqvist said Sharpless first came up with the idea that led to this year's prize around the year 2000. He proposed connecting molecules using chemical "buckles."

Meldal is 68 and works at the University of Copenhagen. He and Sharpless started working separately and came up with some of the early chemical connectors. Their research helped the development of medicines and other compounds called polymers, which are used to join things together.

Bertozzi, 55, is based at Stanford University in California. The prize panel said she "took click chemistry to a new level."

Bertozzi, they said, found a way to make click chemistry work inside living organisms without hurting them. The new method became known as a bioorthoganal reaction. Among other things, the reactions are now used to design drugs that can more directly target diseases such as cancer.

Bertozzi said her work makes sure "drugs go to the right place and stay away from the wrong place."

She talked with reporters by phone after the prize announcement. She said she was "stunned" to receive the news. "I'm still not entirely positive that it's real, but it's getting realer by the minute," she added.

Meldal said the Nobel panel told him the news about 30 minutes before the public announcement and told him not to say anything. "This is a huge honor," he said.

Meldal started out as an engineer but changed to chemistry because, he said, "I wanted to understand the world."

The prizes are worth about $900,000 and will be handed out during a ceremony on December 10.

click –n. the short, sharp sound made often by something fitting into something else correctly

snap –v. the sudden sound caused by something moving into a new position or something breaking

buckle –n. a metal device that connects on end of a belt to another

stun –v. to surprise or upset very much

panel –n. a group of people who answer questions or give advice and opinions about things