Update Required To play the media you will need to either update your browser to a recent version or update your Flash plugin.
By Christopher Jones-Cruise
20 June, 2017


The death of an American college student is raising concerns about human rights violations in North Korea.

Warmbier returned home to the United States last week. U.S. officials say he was unable to communicate and in a coma after his release from a North Korean prison.

In January of 2016, the student was arrested on a visit to Pyongyang. North Korean officials accused him of attempting to steal a propaganda sign at a hotel. He was sentenced to 15 years hard labor.

North Korean officials said Warmbier became sick from botulism while in detention and was given medication to help him sleep. They said he fell into a coma 15 months ago and never awoke.

After his release from North Korea, Warmbier was taken to a hospital in Cincinnati, Ohio. Doctors there disputed the North Korean explanation of what happened. But they could not say what caused his brain damage.

His parents said in a statement on Monday their son was "at peace."

"Unfortunately, the awful, torturous treatment our son received at the hands of the North Koreans ensured that no other outcome was possible beyond the sad one we experienced today," the statement said. 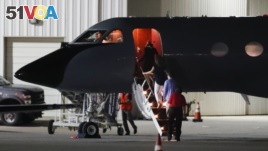 Visitors and medical personnel enter a transport plane carrying Otto Warmbier, before he is transferred to an ambulance at Lunken regional airport, June 13, 2017, in Cincinnati, Ohio.

U.S. President Donald Trump offered his sympathy to the family. "There is nothing more tragic for a parent than to lose a child in the prime of life," he said.

Trump added that Warmbier's death strengthens his desire to prevent future tragedies "at the hands of regimes that do not respect the rule of law or basic human decency."

Tensions between the two countries have increased in recent months because of North Korea's missile and nuclear activities. North Korea has launched more than 20 missiles and carried out two nuclear bomb tests since the beginning of last year.

U.S. officials have said they are concerned about three Korean-Americans who are being held in North Korea. At least six South Koreans are also believed to be jailed there. Some were Christian religious workers. The North Korean government accuses them of spying. Others were reportedly kidnapped by North Korean agents while helping defectors in China.

"The North Korean regime also wages war on their own citizens," noted Marion Smith, the director of The Victims of Communism Memorial Foundation.

In 2014, a United Nations Commission of Inquiry (COI) report compared current abuses in North Korea to those that took place in Nazi Germany during World War II.

The report said the North Korean government is holding between 80,000 and 120,000 political prisoners in four large camps. It accused the government of using torture during questioning. And it said North Koreans suspected of major political crimes often "disappear" without trial or judicial order into prison camps.

The report also noted that North Korea's policy of carrying out executions in public causes people to fear the government.

Robertson added that Warmbier's treatment should cause other countries to restart efforts to hold North Korea responsible for human rights violations.

After the COI report was released in 2014, the U.N. General Assembly approved a resolution to send North Korea to the International Criminal Court. It called for the North Korean government to face charges of crimes against humanity. But the Security Council has yet to approve the measure. Experts believe North Korea's allies, China and Russia, are stopping the Council from taking action on the resolution.

coma - n. a state in which a sick or injured person is unconcious for a long time

prime - n. a period in life when a person is best in health, strength, etc.

regime - n. a form of government

decency - n. behavior and attitude that show respect for other people

dynasty - n. a family of rulers

regard - n. care or concern