Update Required To play the media you will need to either update your browser to a recent version or update your Flash plugin.
By Dan Friedell
10 October 2022


Ben Bernanke, former head of the U.S. Federal Reserve, and two other American economists were awarded the Nobel Prize in Economic Sciences on Monday.

Bernanke is credited with helping lead the United States out of the 2007-2008 financial crisis.

The two other winners were Douglas W. Diamond and Philip H. Dybvig. 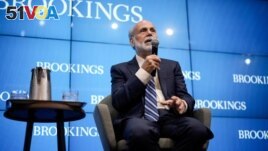 The Nobel committee at the Royal Swedish Academy of Sciences said the three financial experts showed "why avoiding bank collapses is vital."

John Hassler of the prize committee said: "Financial crises and depressions are kind of the worst thing that can happen to the economy."

The three men worked during their university careers to understand how bank failures can cause economic downturns. Before their work, most economists saw bank failures as a result of – but not a cause of – economic problems.

Research by Diamond and Dybvig in the 1980s showed that governments could provide assistance to protect money in banks and prevent financial crises from getting worse.

Bernanke did his work at Stanford University before serving as chairman of the Federal Reserve from 2006 to 2014. Diamond worked at the University of Chicago and Dybvig at Washington University in St. Louis.

Diamond told the Associated Press he was "very happy" and "quite surprised" to get the news of his prize win. He said it was "gratifying" that the work the economists did was easy to understand by government leaders. In addition, the proposed policies "could be used in the actual financial crisis."

Diamond added that the current financial system is "much less vulnerable" because of the work the economists did in the past.

The university research proved valuable in 2008 when investors sent the financial system into a panic. At the time, Bernanke worked with the U.S. Treasury Department to support major banks and ease a shortage of credit. He also pushed interest rates on loans lower and asked the Federal Reserve to buy problematic investments. The actions calmed investors and supported large banks.

The work from 2008 set an example that was used again in 2020 when the world was in the early days of the COVID-19 pandemic. World economies slowed down as people were forced to stay home from work.

At that point, the leader of the Federal Reserve was Jerome Powell. Powell cut interest rates and put money into the financial system, which started a fast recovery. While those actions steadied the economy, many nations are still worried about rising costs in food and energy.

The Nobel committee noted a paper Bernanke wrote at Stanford in 1983 about the cause of the Great Depression of the 1930s. Allan Blinder, an economics expert at Princeton University, told The Associated Press he considered that paper "startlingly original." He said it had played an important part in explaining how the Great Depression started and why it lasted so long.

Simon Johnson is an economist at the Massachusetts Institute of Technology. He said a work by Diamond and Dybvig about how governments can support bank deposits proposed a "very, very powerful idea." In addition, Diamond wrote about how banks should play an important part in deciding which projects are "worthy" of being financed.

Monday's award was the last in a week of Nobel Prize announcements. The winners will share a cash prize worth about $900,000 that will be given out at an event on December 10.

gratify –v. to make someone happy or satisfied

panic –n. a state or feeling of extreme fear that makes someone unable to act or think normally

startle –v. to surprise or frighten (someone) suddenly and usually not seriously