Update Required To play the media you will need to either update your browser to a recent version or update your Flash plugin.
By Hai Do
03 July 2020


Cynthia Erivo, John David Washington, Eva Longoria, Zendaya and Awkwafina are among the 819 people who have been invited to join the Academy of Motion Picture Arts and Sciences.

The organization that puts on the Oscars announced the new invitees this week. If they accept, which most do, they can vote in this year's Academy Awards to take place on April 25, 2021.

The huge 2020 list includes a diverse group of people from all parts of the film-making industry. An Academy statement says 45 percent of the invitees are female and 36 percent belong to underrepresented racial or ethnic groups.

The Academy is made up of people who work in 17 different film industry fields. 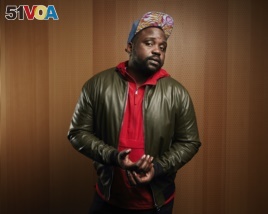 In this Nov. 15, 2018 photo, Brian Tyree Henry poses for a portrait in New York to promote his latest film, "If Beale Street Could Talk."

Invited actors include Ana De Armas from Knives Out, Brian Tyree Henry of If Beale Street Could Talk, Florence Pugh of Little Women, Lakeith Stanfield from Sorry to Bother You, Beanie Feldstein of Booksmart and Constance Wu of Crazy Rich Asians.

Directors like Lulu Wang of The Farewell, Terence Davies of The House of Mirth and Matthew Vaughn of Layer Cake are also on the list.

Twelve people involved with last year's best picture winner, the South Koran's film Parasite, were also invited to join the academy. They include actors Jang Hye-Jin, Jo Yeo-Jeong, Park So-Dam and Lee Jung-Eun. The Academy said that 49 percent of the new invitees are international and represent some 68 countries.

Other invitees include Ryan Murphy, who produced the documentary A Secret Love, country singer Tim McGraw, who was in The Blind Side and Bernie Taupin who helped to produce Rocketman, a movie about his work partner, music star Elton John.

Academy president David Rubin said that the organization is "delighted to welcome these distinguished fellow travelers in the motion picture arts and sciences."

The academy has worked to diversify its membership after receiving widespread criticism on social media about the 2016 awards process, which came to be known as #OscarsSoWhite. The organization aimed to double its female membership and minority membership by 2020.

The academy has also announced a new five-year plan that includes diversity standards for award nominees.

"We look forward to continuing to foster an Academy that reflects the world around us in our membership, our programs, our new Museum, and in our awards," the academy chief Dawn Hudson said in a written statement.

Hai Do adapted this story based on Associated Press news reports. Caty Weaver was the editor.

diverse - n. made up of people or things that are different from each other

distinguished - adj. known by many people

fellow - n. a member of a literary, scientific or artistic organization

standard - n. a level of quality and achievement that is considered desirable

foster - v. to help something grow and develop

reflect - v. to show something