Update Required To play the media you will need to either update your browser to a recent version or update your Flash plugin.
By Ashley Thompson
25 July, 2018

He has become one the best-known players on the team - and not just because of his plays on the football field.

After the team won the Super Bowl, Kelce gave an emotional speech in front of a huge crowd of Philadelphians. He did so wearing colorful "Mummers" clothing. Mummers are costumed bands known for their New Year's Day performances in Philadelphia. 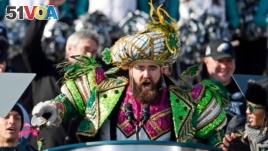 In this Feb. 8, 2018, file photo, Philadelphia Eagles center Jason Kelce, wearing a Mummers costume, speaks at the conclusion of the NFL team's Super Bowl victory parade in front of the Philadelphia Museum of Art in Philadelphia. (AP Photo/Alex Brandon)

Football and public speaking abilities aside, Kelce is also known for his saxophone skills.

And on Tuesday night, those skills were put to the test. He played his instrument with the world-famous Philadelphia Orchestra -- one of the so-called "Big Five" American orchestras.

Kelce and the orchestra played music that went along with a special video of the Eagles' winning season. The performance raised money for the Eagles' Autism Challenge. The effort aims to support research on autism, a developmental disorder.

Kelce has played the baritone saxophone since he was young. He told CBS Philly that, long before he was an Eagle and a Super Bowl champion, he took part in many activities during high school. Among them was his school's jazz band. "Music was a big part of my life," Kelce said.

He has joined other area orchestras for special performances in the past. In February, he played with Philadelphia's Avalon String Band during a special Mummers parade to celebrate Mardi Gras.

A roster is an official list of the people on a team.

Of course, Kelce will not be moving anywhere. He is expected to bring all of his skills back to the Eagles as the team aims to defend their championship.

The team begins the 2018 season on September 6.

Ashley Thompson wrote this article based on reports from the Associated Press and CBS Philly. Hai Do was the editor.

saxophone - n. a musical instrument that has a curved metal tube and that is played by blowing into a mouthpiece and pressing keys with your fingers

band - n. a usually small group of musicians who play popular music together

orchestra - n. a group of musicians who play usually classical music together and who are led by a conductor

baritone - adj. having a range that is higher than a bass and lower than a tenor