Update Required To play the media you will need to either update your browser to a recent version or update your Flash plugin.
By VOA
04 September 2022

Labor Day also informally marks the end of summer. Many students return to school after Labor Day. The hot days of summer turn cooler. Many Americans celebrate the holiday with an outdoor family barbecue.

But Labor Day started with a struggle. On May 1, 1889, workers demonstrated on the streets of Paris, France. International Labor Day was born. Most industrialized countries in the world -- except the United States and Canada -- celebrate Labor Day on the first of May. 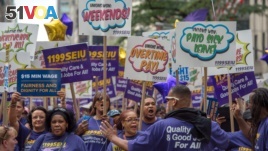 The first American Labor Day celebration was held on September 5, 1882, in New York City. About 10,000 workers marched through the streets to show the strength of labor organizations.

For many years after that, American workers used the first Monday in September to demand better working conditions and pay. Music was a part of many of those marches.

Labor songs traditionally tell stories of conflict and hopes for a better life. Here is Pete Seeger's "We Shall Not Be Moved."

Many classic American labor songs came from workers in the coal mines of the South. Mine owners bitterly opposed workers' unions. In Kentucky, company police searched for union leaders. They waited outside a worker's home for several days to block him from organizing.

The coal miner's wife, Florence Reece, stayed inside with her children. She wrote this song, "Which Side Are You On?" Here is Natalie Merchant singing the song.

Another American labor song is called "Bread and Roses." It is based on a poem by James Oppenheim, published in December of 1911.

The poem speaks about the women's labor movement. At that time, conditions in factories, where many women worked, were horrible. A fire at a clothing factory in New York killed 146 people. Most of the victims were immigrant women.

Even though Labor Day demonstrations are not as common in the U.S. today, the song reminds us to celebrate the effort and love that many people give to their work.