Update Required To play the media you will need to either update your browser to a recent version or update your Flash plugin.
By Pete Musto
20 May, 2018


Some countries ban possession and use of the drug marijuana, but it is legal in parts of the United States.

Nine states and Washington, D.C. have measures legalizing recreational uses of marijuana. The drug is approved for medical purposes in a total of 29 states.

But in Oregon, an oversupply of marijuana has driven down prices of the drug. This has led some worried growers to start moving towards to another product – the hemp plant -- to keep their businesses profitable.

Marijuana comes from the dried leaves and flowers of the Cannabis sativa or Cannabis indica plant. Hemp is another kind of cannabis. It does not have the same intoxicating effects as the widely known drug.

Hemp contains less than 0.3 percent of THC, the substance that gives marijuana its powerful effect. Growing industrial hemp is legal under federal law, and the plant can be sold for use in things like cloth, food, seed and building materials.

In Oregon, the number of requests for permission to grow hemp is 20 time what is was in 2015. That makes Oregon second only to Colorado among the 19 states with active hemp farming.

The changing market comes at the same time as demand is rising for a chemical that comes from hemp. That chemical is cannabidiol, or CBD, which some people see as good for human health. 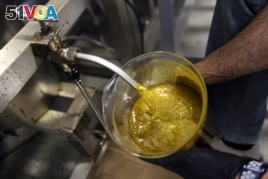 CBD oil flows into a large container during the extraction process from hemp plants at New Earth Biosciences in Salem, Oregon.

In its purer form, CBD oil can sell for thousands of dollars per kilogram. Farmers can make more than $100,000 on less than half a hectare of land by growing hemp to produce it.

That purified substance can also be made into crystallized particles.

Jerrad McCord grows marijuana in southern Oregon. He just added 5 hectares of hemp to his land. He told the Associated Press that many people see it as a new way to get rich quickly.

"This is a business," he said. "You've got to adapt, and you've got to be a problem-solver."

But there is a problem few people predicted when Oregon voters approved a measure to legalize marijuana four years ago.

The state's climate is perfect for growing marijuana, and growers produce unusually large crops. And under state law, none of it can leave Oregon. That, combined with a decision to not limit the number of permits for growers, has created an oversupply.

The total amount of marijuana stored in Oregon is shocking for a state its size. Many people smoke the flower of the plant, and there are nearly 450,000 kilograms of usable flower in the state. There is an additional 159,000 kilograms of other forms of marijuana, including products one can eat or drink.

The Oregon Liquor Control Commission supervises the state's marijuana industry. The commission says some of the flower is used in specialty products, like oils, which have increased in popularity. But the agency cannot say how much.

A detailed study of the market is currently taking place.

The price for a single gram of marijuana has fallen about 50 percent since 2015, from around $14 to around $7. That information comes from the Oregon Office of Economic Analysis. Growers and sellers alike have felt the effect.

Trey Willison changed his farming business from marijuana to hemp this season. Now, he says, he is considering destroying some of his crops instead of selling them at low prices.

"Whoever would have thought we'd get to the point of destroying pounds of marijuana?" Willison said. 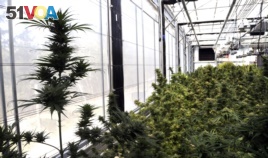 This difficult choice is driving more of Oregon's marijuana growers towards hemp. The crop is already popular in states like Colorado and Kentucky, and gets a lot of attention in the cannabis industry.

In Oregon, the number of government permits to grow hemp rose from 12 in 2015 to 353 by early May 2018. And the state is now second nationwide in terms of approved, licensed hectares.

Colorado is the U.S. leader in hemp production. It and Washington were the first states to widely legalize marijuana. Both have seen prices drop for marijuana, but not as much as in Oregon.

In Oregon, people are increasingly interested in the gold-colored oil CBD. Its popularity has risen sharply among self-described cannabis experts and is quickly being seen as normal by the general public.

At least 50 percent of hemp nationwide is being grown for CBD extraction. And Oregon is riding the top of that wave, said Eric Steenstra. He is the president of Vote Hemp, an independent organization that fights for pro-hemp laws.

CBD is appearing in everything, from beauty products to bottled water to animal food.

Supporters say CBD offers a number of healing effects, from easing pain to calming nerves. However, scientists warn that there have been few wide-reaching studies of how CBD affects humans.

That is mostly because the U.S. Drug Enforcement Administration still considers cannabidiol a Schedule 1 drug -- meaning it is illegal to buy or sell. And the government requires special approval to study it.

Ziva Cooper is an associate professor of clinical neurobiology at Columbia University in New York. She is investigating the possible medical effects of cannabis and cannabinoids.

Cooper says small studies involving animals have shown CBD could be helpful in treating pain, drug dependency and other conditions.

Next month, the U.S. Food and Drug Administration could approve the first medicine made from CBD. It is used to treat people with epilepsy.

Gillian Flaccus reported on this story for the Associated Press. Pete Musto adapted her report for VOA Learning English. George Grow was the editor.

Is marijuana use permitted in your country? How should your country react to the marijuana industry? Write to us in the Comments Section or on 51VOA.COM.

recreational – adj. used for pleasure instead of for medical purposes

intoxicating – adj. causing someone to be unable to think and behave normally

crystallized – adj. change into a solid form that is made up of small pieces of a substance that has many sides and are formed when the substance turns into a solid

licensed – adj. having official permission to have or do something

extraction – n. the act or process of getting a substance from something by the use of a machine or chemicals

techniques – n. ways of doing something by using special knowledge or skill

clinical – adj. relating to or based on work done with real patients