Update Required To play the media you will need to either update your browser to a recent version or update your Flash plugin.
By VOA
27 August, 2014


Details are being gathered about the first American known to be killed fighting for Islamic State militants in Syria. Douglas McCain was 33 years old when he died Sunday. He was raised in Minnesota and had worked as a caregiver in California.

Mr. McCain reportedly left the U.S. for Turkey and later traveled into territory controlled by the Islamic State militants. Over the weekend, he took part in an attack near Aleppo against another opposition group, called the Free Syrian Army, NBC News reported. 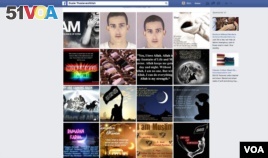 U.S. officials have recently expressed concern about American citizens who join extremists groups like Islamic State. They fear one or more might return home to carry out terrorist acts on American territory.

Ukrainian government forces and pro-Russian continued to battle for control of Ukraine's coast Wednesday. The separatists captured an important town in the southeast.

The separatists entered Novoazovsk after three days of shelling. About 40,000 people live in the town, a popular vacation place along the Sea of Azov. The town is on a road that links Russia to the Ukrainian port of Mariupol and Crimea on the Black Sea.

First Patient to Receive Spine Part Made from 3-D Printer

A Chinese boy with bone cancer has become the first patient with a spinal part from a three-dimensional printer.

Doctors at Beijing University removed a small part of Qin's backbone and replaced it with a 3-D printer copy. The part is made of titanium.

communicate – v. to tell; to give or exchange information

popular – ad. liked by many people; generally approved by the public

possible – ad. able to be done; can happen or is expected to happen

bone – n. the hard material in the body