Update Required To play the media you will need to either update your browser to a recent version or update your Flash plugin.
By Christopher Jones-Cruise
13 June, 2017


U.S. Secretary of State Rex Tillerson says North Korea has released an American college student from prison. Otto Warmbier had been sentenced to a 15-year term on charges of attempted theft. The North Korean government said Warmbier had tried to steal a propaganda sign in January 2016. He was sentenced in March of that year.

Tillerson said the 22-year-old Warmbier will be reunited with his family in Cincinnati, Ohio June 13. Warmbier is a student at the University of Virginia.

Tillerson said: "At the direction of the president, the Department of State has secured the release of Otto Warmbier from North Korea."

The Washington Post newspaper reported that Warmbier was in a coma when he left North Korea. It said he had been in that condition for a year.

Warmbier's father Fred told the newspaper that he is happy his son is coming home.

"At the moment, we're just treating this like he's been in an accident. We get to see our son Otto tonight," he told the newspaper.

There is a chance that the return to North Korea of former National Basketball Association (NBA) player Dennis Rodman could help efforts to release the three other Americans being held there. Tillerson said the State Department continues to discuss the issue of the three Americans with North Korea. 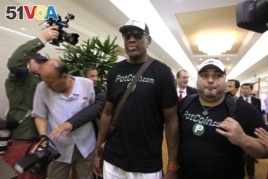 Rodman spoke to reporters at the Beijing International Airport before leaving for Pyongyang. He said "I'm just trying to open the door."

U.S. Under Secretary of State Thomas Shannon confirmed that Rodman was traveling to North Korea as a private citizen. Speaking in Tokyo, Shannon said "We wish him well. But we have issued travel warnings to Americans and suggested they not travel to North Korea for their own safety."

The 56-year-old former basketball star has visited North Korea at least four times. He has developed a friendship with its leader Kim Jong Un, who likes the NBA, especially the team Rodman played on in the 1990s. Rodman has called Kim an "awesome kid."

Observers worry that Kim will use Rodman to try to improve his own public image.

Anthony Ruggiero is an expert on North Korea at the Foundation for Defense of Democracies in Washington.

"With Dennis Rodman's celebrity I think it is bringing attention to Kim Jong Un that he does not deserve and shouldn't get," he said.

Ruggiero believes Rodman's visit could harm international efforts to strengthen sanctions on North Korea. The sanctions are to punish North Korea for its continued nuclear and ballistic missiles programs and human rights violations.

Rodman may have played an important part in gaining the released of American missionary Kenneth Bae in 2014. Bae was charged with "hostile acts against the state" and was in a North Korean labor camp for two years.

During Rodman's last trip to North Korea in 2014, he took part in a basketball game with other NBA players and sang "happy birthday" to Kim, who attended the game.

He later wrote to Kim Jong Un asking for Bae's release. In his letter, Rodman called Kim his "friend for life," and said he understood that Bae carried out crimes. Then, Rodman asked Kim to release the prisoner to show the U.S. how loving he is.

In November, 2014, then-U.S. intelligence chief James Clapper visited Pyongyang and negotiated the release of Bae and Matthew Miller, another American. But Bae has since said Rodman was the reason he was released.

propaganda - n. ideas or statements that are often false or exaggerated and that are spread in order to help a cause, a political leader, a government, etc.

coma - n. a state in which a sick or injured person is unconscious for a long time

accident - n. a sudden event (such as a crash) that is not planned or intended and that causes damage or injury

celebrity - n. a person who is famous

missionary - n. a person who is sent to a foreign country to do religious work