Update Required To play the media you will need to either update your browser to a recent version or update your Flash plugin.
By VOA
18 May, 2016

That is the opinion of Valerie Jarrett, a special advisor to President Barack Obama. She met with educators on Wednesday to mark the anniversary of the court ruling.

In 1954, the Supreme Court decided that public schools could not separate students by race. The case was known as Brown vs. Board of Education of Topeka, Kansas.

Chief Justice wrote the opinion of the court's nine members. "We conclude that in the field of public education the doctrine of 'separate but equal' has no place," he said. "Separate educational facilities are inherently unequal."

The National Association for the Advancement of Colored People (NAACP) helped families fight racial segregation laws. The family of student Linda Brown objected to her being sent to a school far from her home. They said they wanted her to attend a good school closer to home where white children went.

"To separate them from others of similar age and qualifications solely because of their race generates a feeling of inferiority as to their status in the community that may affect their hearts and minds in a way unlikely ever to be undone," wrote Justice Warren. 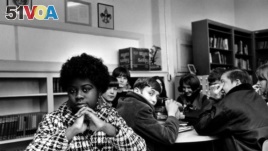 FILE - Linda Brown Smith, date and location unknown. Smith was a third grader when her father started a class-action suit in 1951 of the Brown v. Board of Education of Topeka, Kansas, which led to the U.S. Supreme Court's 1954 landmark decision against sc

Laws that permitted racial segregation were called "Jim Crow" laws. "Jim Crow" was the name of a black slave in a stage play in the 1830s. His character was dull and meant to represent blacks in America.

Blacks were brought to America against their will as slaves in the 17th and 18th centuries. Although slavery was banned after the U.S. Civil War, segregation and discrimination did not stop.

"Jim Crow" laws were in effect for many years, mostly in the southern United States. They enforced separate schools and restrooms for blacks and whites. Some "Jim Crow" laws created rules and taxes on blacks who tried to vote. That enabled white males to remain in power.

While the Supreme Court ruled against segregation in the Brown vs. Board of Education case, it continued. In Little Rock, Arkansas, the governor ordered National Guard troops to prevent black students from entering schools for whites in 1957.

By 1958, seven states still had laws segregating public schools, and three states did in 1961.

On Wednesday, educators gathered at the White House to talk about how segregation continues in this century in education and other places.

For example, in Cleveland, Mississippi, schools are divided by race. Schools on the east side of town are black; schools on the west side are mostly white. Last Friday, a federal court ordered the schools integrated, ending that division, according to CNN.com.

The U.S. Government Accountability Office (GAO) investigated other places like Cleveland, Mississippi. It found that in areas where people are poor, and where students were black or Hispanic, schools were more "isolated."

Isolated schools are where 75 percent or more of students are of the same race or economic class.

segregation - n. the tradition of keeping people of different races or religions separated

vs. - prep. short form of verses, meaning against or as opposed to

doctrine - n. a set of ideas or beliefs that are taught or believed to be true

inherently - adj.belonging to the basic nature of someone or something

dull - adj. not exciting or interesting

integrated -adj. having different parts working together as a unit

isolated - adj. separate from others.

triple - v. to cause something to become three times as great or as many