Update Required To play the media you will need to either update your browser to a recent version or update your Flash plugin.
By Xiaootong Zhou
01 May, 2018

Keziah Daum is an American high school student from the state of Utah. She recently attended her school's prom dance, where she wore a traditional Chinese dress called, in Mandarin, a "qipao."

Daum found the dress at a used clothing store. She thought it had a special look, and hoped it would help her stand out at the dance.

Daum said she chose the form-fitting dress in part because she liked its high collar. The dress was "Chinese red", a color that represents good fortune and joy. 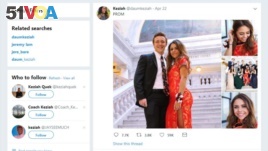 A screenshot of Keziah Daum's Twitter page, showing Daum in her prom press.

On her prom night, Daum posted photos on Twitter of herself wearing the dress.

One week later, her post has received more than 14,000 comments. It has created a heated debate about whether it is right for Daum, who is not Chinese, to wear such a traditional Chinese gown.

Major American newspapers like The Washington Post are writing about the online debate. The Post reported Tuesday that Daum said wearing the qipao "really gave me a sense of appreciation and admiration for other cultures and their beauty."

The debate centers on whether Daum wearing a qipao is an example of cultural appropriation. This is when members of the dominant culture in a society adopt practices of a minority culture, without fully understanding the meaning of the practices.

Twitter user Megan Phung wrote, "If you...'love' our culture, you'd know it's a traditional gown. Yet you claim, it's just a ‘dress.' It has cultural meaning and significance to us."

Another Twitter user, Jeremy Lam, wrote, "My culture is not your...prom dress." In several other tweets, Lam explained the history and importance of the qipao.

Others on social media, however, did not consider Daum's prom dress to be a problem.

Ying Li, for example, tweeted, "I am a Chinese woman. I support you. You rocked that dress!!"

Another Twitter user, Nyah Memmott, asked, "Why can't we grow up and not be so sensitive about what someone wears. It doesn't matter."

Daum has apologized on Twitter. She said she meant "no disrespect to the Chinese culture."

She also said she does not plan to take her post down. "I've done nothing but show my love for the culture," she said. "It's a....dress. And it's beautiful."

Xiaootong Zhou wrote this report for Learning English. Ashley Thompson was the editor.

collar – n. a part of a piece of clothing that fits around a person's neck and is usually folded down

fortune – n. a great amount of money or possessions

gown – n. a long, formal dress that a woman wears especially during a special event

admiration – n. a feeling of great respect and approval

dominant – adj. more important, powerful, or successful than most or all others

adopt – v. to begin to use or have (a different manner, method, etc.)

sensitive – adj. easily upset by the things that people think or say about you