Update Required To play the media you will need to either update your browser to a recent version or update your Flash plugin.
By John Russell
11 December 2020


American theaters are changing during the coronavirus crisis. Theater groups are finding new, creative ways to perform their art. But it is unclear if such performances should be called live theater or another term, theater experts say.

Broadway is still alive. There continues to be theater on New York's famous Broadway, but it is beyond Manhattan's closed theaters. 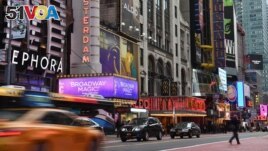 Up north lies the United Palace, a theater with seats for 3,000 people. An actor recently read lines from a stage. The silent theater was mostly empty.

Tony Award-winner Jefferson Mays was performing several parts from "A Christmas Carol," based on the book by Charles Dickens. The performance was being filmed for streaming this month. This one-man show is an example of how many who work in theater are refusing to let COVID-19 stop their art.

"Of everything I've ever done in my life," Arnold added, "it's the place where people lead from ‘how?' instead of leading from ‘why not?'"

Live theater and the health crisis

The coronavirus crisis shut down theaters and the TV and movie industries last spring. Film and TV production have slowly started again. But the virus has created an especially difficult problem for theaters. That problem is the reason it will be among the last performing arts to return to normal.

In theaters, props and costumes are usually touched by many people each night. An orchestra, a large musical group, is often put in a small area just beneath the stage. Backstage areas are small and shared. And theaters are often very crowded.

New ways are needed. Theaters are trying many different ideas. They have done radio plays, online readings, online variety shows and drive-in experiences that mix live singing with movies. The performers of the musical "Diana" met on Broadway to film the show for the American streaming company Netflix.

Mays' "A Christmas Carol" was filmed on a set with a high-tech light source. The performance is raising money for suffering, small theaters around the country. The San Francisco Playhouse recently offered showings of Yasmina Reza's play "Art," a production captured live by many cameras. An important scene that required the actors to touch each other was reimagined to keep social distancing.

A musical version of the animated film "Ratatouille" is being explored on TikTok.

Charlotte Moore is the artistic director and co-founder of the Irish Repertory Theatre in New York City. "We will conquer it. We are theater people. By God, we will conquer it and get it done," she said.

Her company has put on a free streaming holiday production of "Meet Me in St. Louis." Moore directed the production from St. Louis. It has around twelve performers who are recorded individually. The performers were mailed or given props, costumes and a green screen. A green screen permits a person to perform without a background. On a computer, the green is later removed, and the background is placed behind the performer.

The performers rehearsed on Zoom and FaceTime, two apps that let people see and talk to each other. A masked and socially distant orchestra recorded the music, and the sets were projected onto the actors' screens.

"You learn minute by minute by minute along the way what works, what doesn't, what to do, what not to do," said Moore. She performed in the first Broadway production of "Meet Me in St. Louis" in 1989.

"It's torture and it's thrilling — thrilling torture." Thrilling is a term that means exciting. Like many other theatrical productions moving into the digital world, it's not clear what to call the new production of "Meet Me in St. Louis." It is not live theater, but it is theatrical.

"It's not definable in our current vocabulary," Moore said. "It has to have a new definition, truly, because it's certainly unlike anything that has been done."

Mark Kennedy reported on this story for the Associated Press. John Russell adapted it for Learning English. Susan Shand was the editor.

stream – v. to send or receive data over the internet (often audio and video) in a steady manner

animated – adj. produced by the creation of a series of drawings, pictures, etc., that are shown quickly one after another produced through the process of animation

conquer – v. to gain control of (a problem or difficulty) through great effort

rehearse – v. to prepare for a public performance of a play, a piece of music, etc., by practicing the performance

vocabulary – n. the words that make up a language