Update Required To play the media you will need to either update your browser to a recent version or update your Flash plugin.
By Ashley Thompson
22 February 2022


Professional soccer players in the United States have reached an historic agreement with the sport's governing body. The deal marks the end of a six-year legal battle over equal pay for male and female players.

The deal promises female players $24 million plus bonuses that are equal to what male soccer players receive. A "bonus" is extra money given to players for doing well at major competitions.

The U.S. Soccer Federation, or USSF, and the women announced the deal Tuesday. The women will divide $22 million, about one-third of what they had sought in damages. The USSF also agreed to establish a separate fund of $2 million. The money will be used to support players after their careers end as well as help grow the sport of women's soccer. 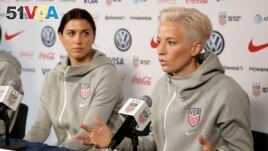 The USSF promised to provide an equal rate of pay for the women's and men's national teams — including World Cup bonuses.

"For our generation, knowing that we're going to leave the game in an exponentially better place than when we found it is everything," soccer player Megan Rapinoe told The Associated Press. "That's what it's all about because, to be honest, there is no justice in all of this if we don't make sure it never happens again."

USSF President Cindy Parlow Cone said: "This is just one step towards rebuilding the relationship with the women's team."

Cone became head of the federation in March 2020. She replaced Carlos Cordeiro as president. He resigned after the federation claimed in court that women players had less physical ability and responsibilities than male players. The USSF was fighting a sex discrimination case brought by members of the U.S. national women's team.

Cone is a two-time champion of Olympic soccer. She is the USSF's first female president.

The U.S. women's team entered play in 1985. It has won four World Cups since. The U.S. men's soccer team has been far less successful. The men have not reached a semifinal match since 1930.

Morgan called the agreement "gratifying," or pleasing. She expressed hope for healing the relationship between the women's team and USSF. "To finally get to this moment feels like we can almost sigh a breath of relief," she said.

The $22 million will be divided into individual amounts proposed by the players.

Cone said the federation's method of equalizing World Cup bonuses is yet to be decided. The federation has until now based bonuses on payments from soccer's international governing body, FIFA. The group set aside $400 million for the 2018 men's tournament, including $38 million to the winning team from France. By comparison, it set aside $30 million for the 2019 women's tournament, including $4 million to the winning U.S. team.

The Associated Press reported on this story. Ashley Thompson adapted it for VOA Learning English.

relief - n. a pleasant and relaxed feeling that someone has when something unpleasant stops or does not happen