Update Required To play the media you will need to either update your browser to a recent version or update your Flash plugin.
By Susan Shand
19 November, 2017


Chelsea Shorte is telling jokes on a cold Wednesday night at an eatery in Alexandria, Virginia.

Shorte tells the restaurant-goers, many of them women, about her decision to perform stand-up comedy instead of improvisational humor.

"I got tired of being cast as people's moms even though I was 23 years old, she says. Shorte adds that men doing improve comedy think all women are mothers. 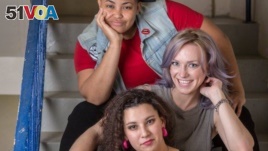 The women gathered at the restaurant understand her statement. Most of them hope to work as comics. They believe that by working with other women, they can get around the barriers set up by men in show business.

"At this moment," her story began, "there are more females serving on the United States Supreme Court than there are writing for Late Show with David Letterman, [and competitors] The Jay Leno Show, and The Tonight Show with Conan O'Brien combined."

She added that 50 writers were working for these TV shows, and none were women.

Comedian and businesswoman Victoria Elena Nones set up the Women in Comedy network, which provided support for the Alexandria restaurant event.

"I thought it was really important to provide a space for women to get together," Nones says.

She founded the network in Chicago in 2015. It now has groups in Chicago, Los Angeles, New York and Washington, D.C.

Nones says she hopes the group will help women find and support each other as they make their own places in an industry that is often hostile to women.

Actress and comic Diane Chernansky says she was surprised to realize one of her own jokes talked about the way women are treated in standup comedy. She often finds herself the only woman telling jokes in a room where all the other performers are men.

"It's very difficult to sit there and listen to lots of men joke about women in general, and how horrible we are," Chernansky says.

Minorities do not rate much better. The heavily male culture of show business has a strong effect on what is expected of women -- and minorities -- in the industry.

Promises are an important part of Hollywood, says E.C. McCarthy. She recently wrote a story for The Washington Post newspaper. It noted that bad behavior in show business is not limited to sexual abuse, or to performers. The promise of support often opens the possibility for other abuses of power.

Harassment is one way to keep people feeling insecure and willing to work for free, McCarthy explains. She detailed one of several times that a male producer tried to take her writing and claim credit for it.

McCarthy wrote that when she first became a writer in Hollywood, she thought sexism would end when younger writers entered the industry, but that did not happen. Instead, she discovered, the younger male writers learned to be sexist from the older men.

Minka Wiltz says she gets angry when "I walk into a room and feel like a piece of meat." Wiltz is a black actress and activist from Atlanta, Georgia. She has a problem with being asked again and again to play black women.

Wiltz says abuse is a serious problem in today's show business culture. She says the way to improve the situation is for women, people of color and other minorities to help each other tell their stories.

For example, Atlanta, a city where the majority of the population is African-American, did not have a black theater group until Wiltz and some friends started one.

In the past, there have been specialized groups in show business.

The small Ivy Theatre Company in New York chooses women and minorities to perform in shows with stories about their lives. The Ivy show "A Real Boy," is about two puppets who raise a boy as their own son. The show is written by Stephen Kaplan, a gay man who is raising an adopted son with his husband.

In Chicago, the popularity of improv comedy means there are many groups of performers, including an Asian-American group called "Stir-Friday Night." This group has helped the careers of Korean-American actor Steven Yeun and Indian-American Danny Pudi.

One of their recent shows made fun of Hollywood for casting of white actress Scarlett Johannsen as a Japanese cyborg in The Ghost in the Shell. The name of the show: 8 Angry Asians, Starring Scarlett Johansson.

Wiltz, the Atlanta-based actress, says these groups and many others are supporting the work that the American entertainment industry ignores.

"I really hope that people realize you have no more excuses for your own success," she says. "I want people to realize that the Hollywood myth, like the American myth, is just that. You can create your own story."

Marissa Melton reported this story for VOANews. Susan Shand adapted the report for Learning English. George Grow was the editor.

cast - v. to choose or appoint actors for parts in a play or movie

network - n. a group of people or organizations that are closely connected and that work with each other

harass - v. to make offensive comments or behave badly; to criticize or make repeated attacks on someone

comedy – n. a performance or shot that is meant to make people laugh

myth – n. a story that was told in ancient times to explain a belief or natural event

puppet – n. a play-thing that is moved by putting your hand inside or by pulling wires that are connected to it

gay – adj. showing a sexual interest in someone of the same sex