Update Required To play the media you will need to either update your browser to a recent version or update your Flash plugin.
By Hai Do
18 October, 2017


American writer George Saunders has won the 2017 Man Booker Prize for his first novel, Lincoln in the Bardo.

The story is an imaginary account of a real event on February 22, 1862. That night, U.S. President Abraham Lincoln visited the grave of his 11-year-old son Willie, who was buried in a Washington cemetery.

The story imagines Lincoln walking around alone in the dark, troubled by the death of his son and the American Civil War.

Meanwhile, Willie is trapped in Bardo – a Tibetan Buddhist term for purgatory. Other dead souls in the graveyard watch young Willie waiting for his father to return. 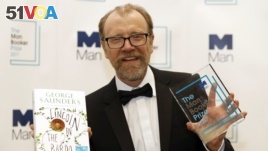 Author George Saunders of the United States holds his book "Lincoln in the Bardo" and his award as winner of the 2017 Man Booker Prize, in London, October 17, 2017. (AP Photo/Kirsty Wigglesworth)

Lola Young, an author and member of Britain's House of Lords, led the group of judges. She praised the "deeply moving" book and said it was "utterly original."

In his acceptance speech, Saunders said "we live in a strange time." He noted the most important question is how to respond to events: with, in his words, "exclusion and negative projection and violence" or "with love."

The 58-year-old Saunders became the second American writer to win the prize. Last year, Paul Beatty became the first American to win for his novel "The Sellout," a satire about race relations in the United States.

In the past, the Man Booker Prize was given only to writers from Britain, Ireland, Zimbabwe or countries in the British Commonwealth.

The rules were changed in 2014 to permit authors of any book written in English and published in Britain to compete. Critics of the rule change say it "Americanized" an important British literary prize.

The winner receives a cash prize of about $65,000. Other past winners include this year's Nobel Prize-winning novelist Kazuo Ishiguro, Salman Rushdie, Iris Murdoch and Canadian writer Margaret Atwood.

Hai Do adapted this story for Learning English based on the Man Booker Prize and Reuters news reports. Mario Ritter was the editor.

purgatory –n. a state where souls go after they have died to be purified, neither heaven nor hell

author –n. a person who writes or starts something

exclusion –n. the act or process of keeping someone or something out

satire –n. using humor to show that someone or something is foolish or bad