Americans Agree Misinformation Is a Problem

Update Required To play the media you will need to either update your browser to a recent version or update your Flash plugin.
By Dan Novak
13 October 2021


A new public opinion study suggests a big majority of Americans believe that the spread of misinformation is a problem.

Most also think social media companies, and the people who use them, are largely to blame. But fewer think that they themselves might be responsible.

These findings came in a poll released Friday by the Pearson Institute and The Associated Press-NORC Center for Public Affairs Research.

In the study, 95 percent of Americans said misinformation was a problem when trying to find important information. About half put a lot of blame on the U.S. government. And about 75 percent said social media users and technology companies were responsible.

Only two in 10 Americans said they are very concerned that they had personally spread misinformation. And six in 10 were at least somewhat concerned that their friends or family members had been part of the problem. 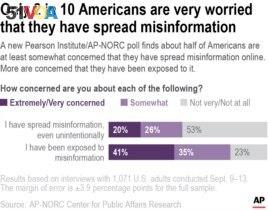 A new Pearson Institute/AP-NORC poll finds about half of Americans are at least somewhat concerned that they have spread misinformation online.

Carmen Speller is a 33-year-old graduate student in Lexington, Kentucky. She has disagreements with her family over COVID-19 vaccines. She trusts the vaccines but her family does not. She believes her family has seen misinformation on TV or read it on news websites and that has led them to stay unvaccinated.

Some of Speller's family members think she is crazy for trusting the government for information about COVID-19.

"I do feel like they believe I'm misinformed. I'm the one that's blindly following what the government is saying, that's something I hear a lot," Speller said.

Speller is not the only one who may be having disagreements with her family.

The study suggests that 61 percent of Republican Party members say the U.S. government has a lot of responsibility for spreading misinformation. Thirty-eight percent of Democratic Party members feel the same way.

That kind of agreement among Americans could be a problem for big social media companies like Facebook. Facebook has recently faced a lot of criticism from both Republican and Democratic lawmakers.

Konstantin Sonin is a professor of public policy at the University of Chicago. He works with the Pearson Institute. Sonin said the poll is bad news for Facebook.

"It makes clear that assaulting Facebook is popular by a large margin — even when Congress is split 50-50, and each side has its own reasons," he said.

The poll also suggested that Americans are willing to blame others but not themselves for the situation. Fifty-three percent of them said they are not concerned that they have spread misinformation.

"We see this a lot of times where people are very worried about misinformation but they think it's something that happens to other people — other people get fooled by it, other people spread it," said Lisa Fazio. She is a Vanderbilt University psychology professor.

Fazio studies how false claims spread. "Most people don't recognize their own role in it," she said.

Amanda Seitz and Hannah Fingerhut reported this story for The Associated Press. Dan Novak adapted it for VOA Learning English. Mario Ritter, Jr. was the editor.

poll — n. an activity in which several or many people are asked a question or a series of questions in order to get information about what most people think about something

margin — n. a measurement of difference between things

role — n. the part that someone has in an activity or series of events