Study: Americans Approve of Gene Editing Only for Health Purposes

Update Required To play the media you will need to either update your browser to a recent version or update your Flash plugin.
By Pete Musto
06 January, 2019


A public opinion study says that most Americans would accept the use of gene-editing technology to create babies who are protected from some diseases.

But the same study finds that Americans do not support changing the genetic structure, or DNA, of children so that they are faster, taller or more intelligent.

The research was carried out by the Associated Press-NORC Center for Public Affairs Research.

It comes after a Chinese scientist claimed in November to have created the world's first gene-edited human babies. The opinion study suggests that many people are concerned about what gene-editing means for the future.

More than 1,000 people were questioned in the study. The researchers said Americans value the medical promise of technology that could change the genetic qualities human parents pass on to their children. But they worry whether it will be used in a moral way. 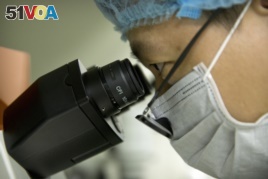 In this Oct. 9, 2018 photo, Qin Jinzhou looks through the lenses of a microscope as he works at a laboratory in Shenzhen in southern China's Guangdong province.

Jaron Keener works at the Carnegie Museum of Natural History in Pittsburgh, Pennsylvania. The 31-year-old told the Associated Press that he opposes "rich people being able to create designer babies."

However, Keener said he would support gene editing in embryos to prevent diseases that have no cure. He said that his mother has lupus, a disease that may have both environmental and genetic causes.

"I've been around somebody with a chronic illness and I've seen the toll that has taken, not just on her life, but the life of my family," he said.

Gene editing takes out a part of DNA to remove, replace or repair a gene.

Changes to adult cells only affect the person being treated. But editing genes in eggs, sperm or embryos can change the resulting child in ways that can be passed to future generations.

Because of its important effects, international science guidelines say gene-editing should not yet be tested in human pregnancies. Scientists say more laboratory research is needed to prove whether or not it is safe.

The AP-NORC study suggests that 71 percent of Americans approve of using gene editing to prevent deadly diseases, such as cystic fibrosis and Huntington's disease.

The study found that 65 percent of Americans would approve of using gene editing to prevent conditions such as blindness. There also was support for using the technology to reduce the risk of diseases that might develop later in life, such as cancer.

However, 66 percent of Americans oppose using gene editing to change qualities such as intelligence or athletic ability. They also oppose changing physical qualities such as eye color or height, the study found.

Dr. Robert Klitzman studies biological research rules. He noted that, if fertility clinics start to edit the genes of embryos, there will be hard choices to make about what conditions can be changed.

What if scientists could identify genes involved with depression or autism or high body weight? Would they be acceptable to edit? "It's one thing to look at the extremes of fatal diseases versus cosmetic things, but in the middle are going to be these very different issues," Klitzman said.

More Americans oppose than approve of government support for testing gene-editing technology on human embryos. About 25 percent of them have no opinion.

Jaron Keener, the Pittsburgh museum worker, said that he opposes the research because he fears it would not be used only to fight disease.

"I just don't have a lot of confidence people wouldn't use it for their own gain," he said.

The study suggests a lack of trust in the technology. About one-third of Americans think gene editing will be used before it is fully tested. Many scientists believe this has already happened in China.

Nearly 90 percent of the people in the study thought that the technology will be used for the wrong reasons.

How do you feel about gene-editing technology? We want to hear from you. Write to us in the Comments Section or on 51VOA.COM.

editing – n. the process of making changes to something

DNA – n. a substance that carries genetic information in the cells of plants and animals

chronic – adj. a substance that carries genetic information in the cells of plants and animals

toll (that has) taken – idiom. a serious, bad effect something has on another thing

sperm – n. a cell that is produced by the male sexual organs and that combines with the female's egg in reproduction

guideline(s) – n. a rule or instruction that shows or tells how something should be done

fertility clinic(s) – n. a place where people get medical help for issues with their ability to produce children

versus – adv. used to show two different things or choices that are being compared or considered

cosmetic – adj. not important or meaningful

confidence – n. a feeling or belief that someone or something is good or has the ability to succeed at something