Update Required To play the media you will need to either update your browser to a recent version or update your Flash plugin.
By VOA
03 July 2022


The United States celebrates its Independence Day on July 4.

John Adams, who later became America's second president, wrote to his wife in 1776 that the day would be remembered with fireworks and celebrations "from one End of this Continent to the other."

But the day he was talking about was July 2, 1776, not July 4. July 2 is the day the Continental Congress of the original 13 colonies voted for independence from Britain. Congress did not officially sign the Declaration of Independence, mainly written by Thomas Jefferson, until two days later. 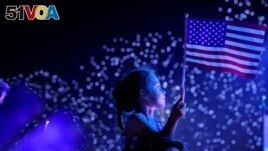 Pauline Maier was a historian who wrote the 1997 book American Scripture: Making the Declaration of Independence. She wrote that in early July of 1777, members of the Continental Congress nearly forgot that it had been a year since they declared their freedom from the British.

They remembered on July 3. It was too late to celebrate on July 2. So, they decided to mark the country's independence with a celebration the following day: July 4.

The Pennsylvania Evening Post of Philadelphia reported, "Yesterday the 4th of July, being the anniversary of the Independence of the United States of America, was celebrated in this city with demonstrations of joy and festivity."

At night, the Post said, "There was a grand exhibition of fireworks...and the city was beautifully illuminated."

The tradition of celebrating Independence Day started to expand after the War of 1812 against Britain. Such celebrations were mostly held on July 4.

John Adams, however, still believed that Americans should celebrate their independence on July 2. Historians say Adams reportedly turned down invitations to take part in July 4 events until the day he died. Adams died on July 4, 1826.

That same day, Thomas Jefferson also died. The two men and former presidents were friends as well as rivals. They both died on the 50th anniversary of the signing of the Declaration of Independence.

In July 1776, the U.S. was a country of 2.5 million people. It is now a country of 332 million, the U.S. Census reports. These days, Americans celebrate Independence Day with fireworks and other festivities.

The yearly Fourth of July fireworks show in New York City is the biggest in the nation. It can be seen in the neighboring states of New Jersey and Connecticut. It is also broadcast nationwide on television.

In Philadelphia, Pennsylvania, organizers are holding a 16-day festival of fireworks, music, and food to celebrate the holiday. The small village of Lewes, Delaware, celebrates its coastal history with the Independence Day Boat Parade.

This year, officials in Atlanta, Georgia, are closing roads in the southern city for the traditional AJC Peachtree Road Race. A total of 60,000 runners are permitted to take part in the popular Independence Day event.

In Los Angeles, California, movie-lovers can choose to celebrate the holiday by watching old Hollywood films from small boats on Castaic Lake or from the grassy area of the historic Hollywood Forever cemetery.

And far north in Anchorage, Alaska, Independence Day traditions include a pancake breakfast, baseball games and late-night fireworks. With 19 hours of daylight this time of year, Anchorage's fireworks show does not start until 11 at night.

original - adj. happening or existing at the beginning

rival - n. someone that is as good that one tries to defeat