Americans Ideas About Their Lawns Are Changing

Update Required To play the media you will need to either update your browser to a recent version or update your Flash plugin.
By John Russell
09 May 2022


A green area of grass called a lawn has been popular in American yards for a long time. But a growing number of gardeners and homeowners now consider the lawn as something that belongs in the past.

More Americans getting rid of lawns

Dennis Liu of the E.O. Wilson Biodiversity Foundation in Durham, North Carolina, said "America is unique in its fixation on the monoculture lawn." Monoculture is a term that means growing only one species. 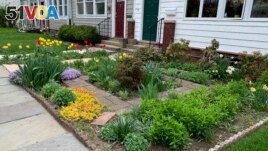 A rowhouse in New Rochelle, N.Y., has a front yard full of flowers and other plants, while neighboring houses have lawns of grass. Many people are converting parts of their lawns into planting beds for a variety of flowers, perennials and edible plants. (AP Photo/Julia Rubin)

Now, drought, falling insect populations and other environmental issues could show the need for more kinds of plants in spaces large and small.

Some cities are taking steps against lawns. Las Vegas, for example, is banning all grass lawns and requiring their removal.

The city has struggled with water scarcity, an issue that is likely to become worse in the coming years.

Other cities are handing out lawn signs with "healthy yard" written on them. The idea is to encourage homeowners who do not use lawn chemicals or cut their grass less often. Many towns are making rules about common tools like gas-powered leaf blowers and mowers, mostly because of noise.

In parts of the U.S., people are experimenting with more "eco-friendly" lawns. They are planting seed mixes with native grasses that do not need as much water.

Others are cutting the grass in their lawns less and letting old plant enemies such as dandelions and clover grow. Still others are trying to replace lawns, completely or bit by bit, with garden beds that are friendly for important insects such as bees.

These measures can lead to a more natural-looking yard.

The pandemic has sped up the move away from lawns. Gardening has grown as a hobby, and many non-gardeners spent more time at home. They are paying more attention to the natural world around them.

Alicia Holloway is a University of Georgia Extension agent in Barrow County. She believes that many people realized that their yards cannot just be decorative – something that looks nice but has no use.

Holloway said "It has to serve some other purpose, whether food, habitat ... pack in as many uses as you can." She described the change as "a shift in thought."

The American lawn is not disappearing anytime soon.

Andrew Bray, vice president of government relations for the National Association of Landscape Professionals, a trade group, says lawns are still the most popular choice in the United States. People want neat outdoor spaces for relaxing, playing and entertaining.

He says his group supports the goal of making lawn care more environmentally friendly. But, he added, he believes some recent laws, like those against gas-powered blowers and mowers, have created a "fraught political environment." Fraught is a term that means having a lot of stress or worry.

Liu said it is hard to overcome tradition and expectations of neighbors. He added that a lawn looks clean, "and it's easy to keep doing what you're doing."

But Liu added: "Once you've established a new equilibrium, it's easier," and there are good results.

Julia Rubin reported on this story for the Associated Press. John Russell adapted it for Learning English.

fixate – v. to look at or think about something constantly : to give all of your attention to something

scarcity – n. : a very small supply : the state of being scarce

encourage – v. to make (someone) more likely to do something

shift –n. a change in a behavior, opinion or belief

equilibrium –n. a state of balance between two forces