Many Americans Travel to Other Countries for Medical Care

Update Required To play the media you will need to either update your browser to a recent version or update your Flash plugin.
By Christopher Jones-Cruise
26 December, 2016


Eleven million people worldwide travel to other countries for low-cost medical treatment. This kind of travel is known as "medical tourism."

Experts say people spend hundreds of billions of dollars on medical tourism every year. And, experts predict the industry will grow by up to 25 percent a year over the next 10 years.

VISA and Oxford Economics recently studied medical tourism trends. The study found that such travel is increasing because of the rising cost of medical treatments, the aging of societies and advances in international transportation. About 340 new international airports will be built in the next 10 years, VISA says.

A company called MedRepublic is connecting doctors with people around the world who need medical care. Robert Page founded the company. 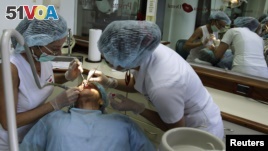 "Our software allows patients to use our website so they can search for doctors directly and talk to them," he said.

The recent VISA study says the United States was the top destination for medical tourism, not Thailand. It also found an increasing number of people are traveling to Singapore, Germany, Korea, Spain, Britain, Canada and Israel for medical care.

The VISA report predicts China will become the top destination within the next 10 years.

Between 750,000 and 1.8 million Americans leave the country for medical reasons every year because of the high costs of treatments and surgeries. Page says Mexico is a common choice for American medical tourists.

"For Americans, the main destination is Mexico due to its geographical proximity and the relation(ship) between both countries. The main reason is treatment for cancer," he said.

Susy Pozo was a medical tourist. Four years ago, she traveled to Mexico for stomach surgery.

"I used to weigh 194 pounds," (or 88 kilograms). "I had many health issues. It's very expensive in the U.S. I was worried because of the security in Puerto Vallarta, but four years ago I made the best decision of my life: I traveled to Mexico and had stomach surgery at the Puerto Vallarta hospital."

The U.S. Centers for Disease Control and Prevention warns that there are risks connected to less-costly medical treatments in other countries.

Robert Page of MedRepublic says his company tries to lower those risks by helping patients talk directly with foreign doctors.

"We are trying to resolve those issues with the right kind of information to show that a doctor and a hospital in India, for example, offer the same quality as a doctor or a hospital in the United States."

trend – n. a general direction of change; a way of behaving, proceeding, etc., that is developing and becoming more common

proximity – adj. the state of being near