Update Required To play the media you will need to either update your browser to a recent version or update your Flash plugin.
By Dan Friedell
03 August 2022


In a major victory for abortion rights, voters in the U.S. state of Kansas on Tuesday rejected a ballot proposal that could have led to restrictions or a ban on abortion.

It was the first time Americans could vote on the issue since the U.S. Supreme Court overturned Roe v. Wade. The decision last June ended the constitutional right to abortion on the federal level and left the decision to the states. Abortion is a medical operation that ends a pregnancy.

In Kansas, the state's highest court called abortion a "fundamental" right under state law in 2019. And the law permitted abortions up to 22 weeks of pregnancy. So Republican lawmakers proposed a ballot measure to change the state's constitution. If approved, the measure would state that Kansas law did not guarantee the right to an abortion. 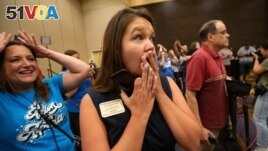 State Rep. Stephanie Clayton reacts to the news that voters rejected a state constitutional amendment that would have declared there is no right to abortion. (Evert Nelson/USA Today Network via REUTERS)

Tuesday's vote in Kansas drew higher-than-expected turnout. With most of the ballots counted, 59 percent of voters favored preserving abortion rights compared to nearly 41 percent who supported removing abortion protections from the state constitution.

American President Joe Biden said in statement: "This vote makes clear what we know: The majority of Americans believe that women should have access to abortion and the right to make their own health care decisions."

Biden also called on Congress to pass legislation to bring back the right to abortion and asked Americans "to use their voices to protect the right to women's health care, including abortion."

Mallory Carroll is a spokesperson for Susan B. Anthony Pro-Life America, a group that supports an abortion ban. She called the result "a huge disappointment." The group had spent over $1 million and talked with people at 250,000 homes throughout Kansas.

Neal Allen is a political science professor at Wichita State University in Kansas. He called Tuesday's vote a "wake-up call for abortion opponents." Allen told Reuters that voters came out on Tuesday because they believed lawmakers would push for a total ban on abortion.

Stephanie Kostreva is a healthcare worker in the Kansas City area. She told the Associated Press that she voted for the ballot measure but is not fully against abortion. She said there are times when an abortion is necessary.

"I know there are medical emergencies, and when the mother's life is in danger there is no reason for two people to die."

Other states may have similar proposals on the ballot this autumn. Voters will get questions about abortion in Vermont, Kentucky, California and possibly Michigan.

The Guttmacher Institute is an organization that supports abortion rights. It says 26 American states are likely to ban abortion since Roe has been overturned.

Dan Friedell adapted this story for Learning English based on reports by Reuters and the Associated Press.

fundamental – adj. relating to the most important part of something, a basic right

turnout – adj. used to describe the number of people who came to an event, such as a vote

access – n. a way of getting to something or something being available

disappointment – n. the feeling of being upset about an unexpected result, or being let down

wake-up call – a phrase meaning to take something seriously