Update Required To play the media you will need to either update your browser to a recent version or update your Flash plugin.
By Kelly Jean Kelly
25 July, 2016


A shooting in the American state of Florida has left two young men dead. The shooting took place early Monday outside a nightclub in the city of Fort Myers. The club was holding a party for teenagers.

Police did not give a reason for the attack. But they said it was not an act of terrorism.

Club Blu released a statement on Facebook after the shooting. It said, "We are deeply sorry for all involved. We tried to give the teens WHAT WE THOUGHT WAS A SAFE PLACE TO HAVE A GOOD TIME."

The statement said the shooting began when parents were returning to the club to take their children home. And, it added, the young people at the party were not responsible for the attack.

Even before the attack, Americans increasingly support stronger gun laws

Florida is also the state where, last month, 49 people were shot and killed at a gay nightclub.

That shooting — along with many others in recent years — is once again pushing gun control to the front of public debate in the U.S. 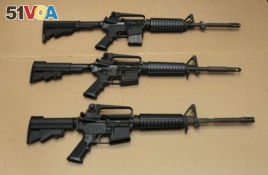 FILE -- Three variations of the AR-15 assault rifle are displayed in Sacramento, Calif.

A survey released this weekend by the Associated Press/GfK found that an increasing number of Americans support stronger gun laws.

Most people who took the survey say they would like a national policy on gun restrictions, instead of having different rules in every state. However, they say they do not believe lawmakers will do anything soon to bring about changes.

Up to this point, the U.S. Congress has failed to act on many of the proposals that surveys show most Americans support.

Americans are not feeling safe

The latest study also found that Americans are not feeling safe. Many are concerned they or a relative will be a victim of gun violence.

And, people who are not white are more likely to be very or extremely concerned about being victims of gun violence.

Alonzo Lassiter, who is African American, said he is worried about his 17-year-old son. His child is autistic. The young man has difficulty communicating and connecting with other people.

Lassiter says that if someone told his son to get on the ground and put his hands up, the young man might not understand or follow the directions.

"He may be an easy target," Lassiter said.

Another person, Milonne Ambroise, told the AP, "If you live in the United States in these days right now, you have to be concerned.

Ambroise is from Haiti, but now lives in Decatur, Georgia.

She said, "You could be on the street somewhere. You could be at a shopping mall thinking there will be a mass shooting and you will be in the middle of it. You can't not think about it."

For the first time in her 50 years in the U.S., Ambroise said, she finds the exit in every room in case she has to flee.

VOANews.com reported on the Fort Myers shooting and the Associated Press-GfK poll. The AP provided additional material about the survey. Kelly Jean Kelly adapted this story for Learning English. George Grow was the editor.

nightclub – n. a place that is open at night, has music, dancing, or a show, and usually serves alcoholic drinks and food

gay – adj. of, relating to, or used by homosexuals

survey – n. n activity in which many people are asked a question or a series of questions in order to gather information about what most people do or think about something: poll

autistic – adj. related to a condition or disorder that begins in childhood and that causes problems in forming relationships and in communicating with other people

exit – n. something (such as a door) that is used as a way to go out of a place