Americans Worry Robots Will Take Jobs, Leave Nothing to Do

Update Required To play the media you will need to either update your browser to a recent version or update your Flash plugin.
By Bruce Alpert
24 October, 2017


Americans are worried about new technology.

They are concerned that machines, including robots, will take over work now done by humans.

These findings come from a new report by the Pew Research Center of Washington D.C.

About 75 percent of Americans questioned by Pew said automation will increase income inequality between the rich and the middle class and poor.

And 64 percent of people expect automation to be so common in America that people will face difficulty finding things to do with their lives.

Some of the concerns about technology come from a distrust about whether machines will always make the right decision. Pew said many Americans believe humans have better judgement in dealing with complex matters -- or when there is not one clear answer.

One example is selecting a person for a job. Three-quarters of Americans said they would not want to apply for a job that uses a computer program to choose the most qualified person.

Americans have similar doubts about riding in a car without a driver. The Pew Research Center found that 56 percent of Americans would not ride in a driverless car. Fifty-nine percent said they would not use a robot caregiver. 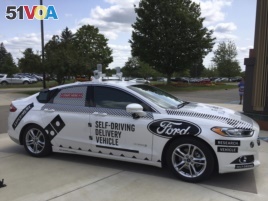 Government should step in

Most Americans want the government to limit automation.

For example, 87 percent support a requirement that all driverless vehicles have a human in the driver's seat who can take control when needed. And 85 percent want to limit machines to mostly doing jobs that are dangerous or unhealthy for humans.

About 33 percent of Americans believe that their own jobs are threatened by automation. About one in five said they knew someone whose hours were cut, or whose jobs were lost all together because of automation.

And only 25 percent expect more jobs to come from automation, Pew said.

Mark Zuckerberg, the co-founder of Facebook, spoke last May to graduating seniors from Harvard University in Massachusetts. His talk centered on the uncertain future facing young people.

"Our generation will have to deal with tens of millions of jobs replaced by automation like self-driving cars and trucks," Zuckerberg told the graduates.

Zuckerberg said young people will have to find projects that will bring both jobs and direct benefits to the people of the world.

He said in his speech that 300,000 people worked to put a man on the moon, and millions of people built the Hoover Dam as well as other great projects over the last 100 years.

Zuckerberg also said, "Now, it's our turn to do great things. I know you're probably thinking, ‘I don't know how to build a dam or get a million people involved in anything.' But let me tell you a secret. No one does when they begin. Ideas don't come out fully formed. They only become clear as you work on them. You just have to get started."

Pew questioned over 4,000 people last May for its research on how Americans see automation.

We want to hear from you. Write to us in the Comments Section and share your views on 51VOA.COM. Are you worried that robots and technology will take jobs away from you and your friends?

robot - n. a real or imaginary machine that is controlled by a computer and is often made to look like a human or animal

optimism - n. a feeling or belief that good things will happen in the future

automation - n. to run or operate something, such as a factory, by using machines and computers instead of people to do the work

qualified - adj. having the necessary skill, experience, or knowledge to do a particular job

insurance - n. an agreement in which a person makes regular payments to a company and the company promises to pay money if the person is injured or dies, or to pay money equal to the value of something, such as a house or car if it is damaged, lost, or stolen

generation - n. a group of people born and living during the same time