Update Required To play the media you will need to either update your browser to a recent version or update your Flash plugin.
By Ashley Thompson
28 January, 2018


For much of U.S. history, the American military fighting force was mostly white and male. But today, the force is as diverse as the country it serves to protect.

Fort Bragg in the state of North Carolina is home to the "All-American" 82nd Airborne. It calls itself the most diverse division in the United States. And the unit's soldiers say that, despite racial problems within the country, its values remain unchanged. 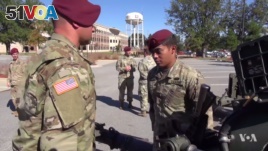 The 82nd Airborne is the most diverse military division in the United States, according to the US Army.

Lieutenant Colonel Joe Buccino is communications director for the 82nd Airborne. He says the unit was the "first racially integrated unit in the U.S. Department of Defense." It was also the first division to have woman infantry commanders, and the first to be organized with people from all over the country.

The base has paratroopers from all 50 states, with more than 120 nationalities.

Private First Class Irvin Andrean grew up in Indonesia before moving to the eastern U.S. state of Pennsylvania as a teenager. He joined the Army as a mechanic. He says he has never felt out of place.

"When I first got here, they all welcomed me," Andrean said. "Like, they never treated me differently."

Sergeant Selene Uribe grew up in the United States, but English was not her first language. She says joining the U.S. Army required making some changes.

"Coming from a very small town, which is Richgrove, California, 99.9 percent Hispanic, it was a culture shock," she said.

Uribe and others in the unit say they welcome the differences within their division. They also say they have grown from working with people with different life experiences.

Specialist Vince Vest said, "I've met some very amazing people and it's opened my eyes a lot. And I've gained a lot of wisdom through those people, and I've made lifelong friends."

Out in the civilian world, the United States is in the middle of a political debate over immigration and racism. Some of the debate has been fueled by controversial remarks made by President Trump.

The soldiers at Fort Bragg say they have not experienced racial discrimination in the military. Yet Master Sergeant Jose Colon worries about the day he retires and returns to non-military life.

"I "I don't see any camaraderie in the civilian world coming," he said.

Colon says the 82nd, and the whole U.S. Army, has an established a code of conduct that does not permit racism.

"You feel safe in some aspects by being in the military because you have these rules that help protect you and make it equal," he said. "That's why I love it. That's kind of the reason why I joined."

As the political debate over immigration continues, the Army continues to welcome recruits from all over the world.

Staff Sergeant Alfred Kollie fled Liberia and lived most of his life in a Ghana refugee camp. He now leads a 20-soldier fueling team for the 82nd Airborne.

Kollie said, "As a child in Africa, seeing all the chaos and death and destruction, I felt myself that I owe the world to be part of something good and not something evil."

VOA's Carla Babb reported this story. Ashley Thompson adapted it for Learning English. Hai Do was the editor.

diverse - adj. different from each other

despite - preposition. without being prevented by (something) — used to say that something happens or is true even though there is something that might prevent it from happening or being true

integrate - v. to end a policy that keeps people of different races apart in (a place, such as a school

infantry- n. the part of an army that has soldiers who fight on foot

paratrooper- n. a member of a group of soldiers who are trained to jump out of airplanes using a parachute

wisdom- n. knowledge that is gained by having many experiences in life

controversial- adj. relating to or causing much discussion, disagreement, or argument

camaraderie- n. a feeling of good friendship among the people in a group