The Grand Canyon: A Sight Beyond Words

Update Required To play the media you will need to either update your browser to a recent version or update your Flash plugin.
By Ashley Thompson
19 August, 2016

Our National Parks journey continues this week in one of the most popular and beautiful places in America: Grand Canyon National Park in the state of Arizona.

The Grand Canyon is one of the seven natural wonders of the world, and one of the largest canyons on Earth. It stretches for 450 kilometers. Parts of the canyon are more than 30 kilometers wide and one kilometer deep.

Many writers have tried to describe the wonder of the Grand Canyon. They use words like mysterious, overpowering, and strange. But it is not possible to put human meaning to such a place. The Grand Canyon truly is beyond words.

"Is this your first time at the Grand Canyon?"

And what do you think (of the Grand Canyon)? Do you have a few words to describe it?"

"What do you think of the Grand Canyon?"

"Do you have some words to describe what you are seeing?"

A look back in time

The canyons of America's Southwest are deep, ancient openings in the Earth. They look as if they formed as the earth split apart.

In reality, rivers formed these canyons. 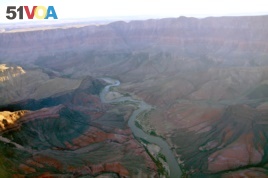 Forty million years ago, the Colorado River began cutting through the area around the present-day Grand Canyon. The river carried dirt and pieces of stone that slowly ate away at the surrounding rock. It left a pathway of enormous rock openings. At the same time, forces deep within the Earth pushed up the surrounding land.

Rain, snow, ice, wind and plant roots rubbed away at the top of this new canyon. Below, the river continued to uncover more and more levels of ancient rock.

Some of the exposed rocks along the Grand Canyon's walls are nearly 2 billion years old. They are among the oldest rocks on earth, with many levels of granite, schist, limestone and sandstone.

The Grand Canyon measures 2,500 meters from the canyon floor to its highest point.

Because of its size, the weather at the top of the canyon is often much different from the bottom. 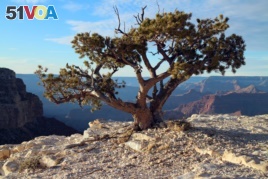 The Grand Canyon is home to some 2,000 plant species. Some of these species can only be found in the park.

The Park is also home to more than 370 species of bird, 90 kinds of mammals and 40 kinds of reptiles.

Many of the birds spend the whole lives in the Grand Canyon. Others species depend of the Canyon for food and shelter during large migrations.

The Grand Canyon was named a Globally Important Bird Area in 2014 because of the role it plays in protecting many species of birds.

Humans in the Grand Canyon

Native American occupied the Grand Canyon 3,000 years ago. Bones, hair, feathers and the remains of plants have been found in deep, dry caves high in the rock walls.

The Hopi, the Paiute, the Navajo and other Native American tribes have all been in the area for at least 700 years.

In 1869, American John Wesley Powell explored the Grand Canyon. He recorded much of what we know today about the area.

John Wesley Powell's group during their second expedition of the Grand Canyon, 1871.

Soon after they started their journey, Powell's group lost some of its food and equipment. Three members decided to leave the group. As they walked up and out of the Grand Canyon, they were killed by Native Americans.

The rest of Powell's group survived the journey. Starved and tired, Powell and his group reached the end of the canyon. They had traveled by boat down the Colorado for more than three months. 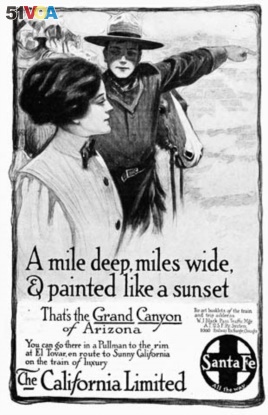 John Wesley Powell's reports and maps from the trip greatly increased interest in the Grand Canyon. But visitors did not begin to go there in large numbers until 1901. That year, a railway was built that reached the area.

Depending on the time of day, the sun lights up the rock walls in red, orange, and golden colors. The bright colors are the result of minerals in the rock. Their appearance changes endlessly -- with the light, the time of year, and the weather.

At sunset, the canyon walls display fiery red and gold hues. Then they take on softer colors of blue, purple, and green. 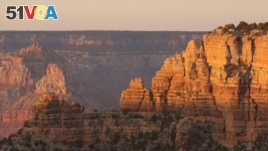 The Grand Canyon at sunset.

Most visitors walk along paths partway down the canyon. It takes several hours to walk to the bottom, and even longer to climb back up. Some visitors choose to ride mules to the bottom of the canyon. Mules are strong, sturdy animals that look similar to horses.

Fog at the Grand Canyon

Visitors can also explore the Grand Canyon in other ways. Hundreds of thousands of people see the canyon by air each year. They pay a helicopter or an airplane pilot to fly them above and around the canyon.

Thousands of people every year choose to explore the Grand Canyon by boat from the Colorado River. These trips last one to three weeks.

Most people who come to the Grand Canyon National Park visit an area known as the "South Rim." That area has shuttle buses that take visitors to overlooks. 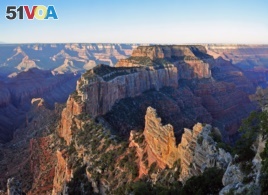 A view from the North Rim

Visitors can also see the Grand Canyon from a huge glass walkway called the Skywalk. The Skywalk is on the Hualapai Indian Reservation in the western part of the canyon. The Hualapai Indians built it to increase tourism at the reservation. It opened in 2007. 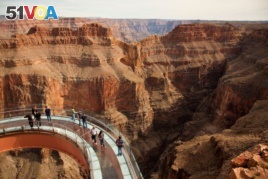 The Skywalk extends more than 20 meters from the canyon's rim. It is suspended more than 1,200 meters above the bottom of the canyon, and is shaped like a giant horseshoe.

Many call the skywalk an engineering wonder. But others have criticized the skywalk and its development. They say it reduces the enjoyment of nature in the Grand Canyon.

For visitors hoping to get a view of the entire Grand Canyon, they will have to travel well beyond the state of Arizona.

The only place to see the entire canyon at once is from outer space. 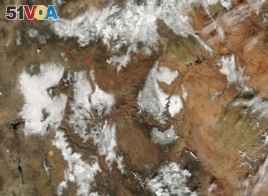 Ashley Thompson adapted this report, with materials from VOA Learning English archive and the National Parks Service. Hai Do was the editor.

speechless - adj. unable to speak because of anger, surprise, etc

minerals - n. a substance (such as quartz, coal, petroleum, salt, etc.) that is naturally formed under the ground

helicopter - n. an aircraft that can stay in the air without moving forward and that has metal blades that turn around on its top

access - v. to be able to use, enter, or get near (something)