Update Required To play the media you will need to either update your browser to a recent version or update your Flash plugin.
By VOA
15 April, 2016

This week, our National Parks journey across the United States takes us to southwestern Colorado.

We are visiting a large U.S. national park called Mesa Verde. It was established to protect the culture of ancient Native Americans.

Mesa Verde National Park is over 100 years old. In 1906, then President Theodore Roosevelt signed a bill creating the park. 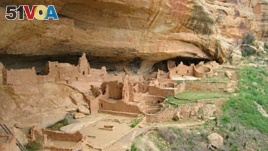 A view of cliff dwellings at Mesa Verde

Mesa Verde offer visitors a look into the lives of the Ancestral Pueblo people, who lived in the area between 700 and 1,400 years ago. The national park protects almost 5,000 archaeological sites. They are some of the best preserved archeological areas in the country.

The term "Mesa Verde" is Spanish for "Green Table." Early Spanish explorers gave the name to the area.

In geology, a "mesa" is a flat-topped highland with steep sides. Mesa Verde is not actually a mesa. It is a cuesta -- a term used to describe a hill with a sharp drop on one side and a soft, gentle slope on the other. A more correct name for the national park, then, would be "Cuesta Verde."

The gently sloping side of Mesa Verde was important in the formation of the 600 cliff dwellings within the park. Cliff dwellings are living areas that were set up in caves -- the large, open areas in the side of the cliff.

Mesa Verde rises more than 540 meters above the ground. Visitors can drive to the top of the hill on a winding mountain road. In the distance are the flatlands and mountains of an area called the "Four Corners." That is where the western states of Colorado, Utah, New Mexico and Arizona meet.

Some of the ruins in the Four Corners are from the earliest people who lived there. They were hunters and gatherers, now known as Basket Makers.

The Basket Makers lived in simple caves. The first evidence that ancient people had moved to Mesa Verde is from about 1,500 years ago. Those people lived in pit houses, large holes in the ground with wood and mud covering the top.

In the eighth century, the early Pueblo people began building square structures of large connected rooms, or pueblos, above ground. More than 300 years later, they climbed down the canyon walls and began building cliff dwellings.

Today, visitors to Mesa Verde National Park can see some of the remains of all four kinds of settlements. Visitors are able to explore several of Mesa Verde's renowned cliff dwellings. Many of them take several hours to reach by foot. Signs along some of the paths point to trees and plants used by the Ancestral Puebloan people. Visitors will also find the juniper and pinon pine trees that make Mesa Verde green.

Cliff Palace is the largest cliff dwelling in Mesa Verde and North America. It has 150 rooms. It is not easy to get to Cliff Palace. Visitors must climb down into the canyon on a narrow path with many steps. They must also climb down several ladders. But the trip is well worth the effort. Visitors can examine this beautiful structure made of stone and clay.

Spruce Tree House is the third largest cliff dwelling in Mesa Verde. It has 114 rooms. It also has eight underground rooms called kivas. Pueblo Indian men gathered in the kivas for ceremonies.

Spruce Tree House is usually the easiest cliff dwelling to visit. The path winds down into the valley and then up to the ruins. But visitors have not been able to explore Spruce Tree House since October of 2015, after rocks fell near the area. Park officials closed the site for safety reasons.

Archeologists working in Mesa Verde have recovered many objects that the ancient Pueblo people used, including tools and jewelry. Many of the objects can be seen in the visitors' center. However, human remains or any object from a burial area may not be touched or shown. This is to respect the wishes of the modern Puebloan people who live in the area today.

Mesa Verde has been recognized as a special place. The United Nations named it as one of the first World Heritage sites in 1978.

As part of the National Park Service's 100th anniversary, Mesa Verde is offering special "backcountry" tours. Visitors can take a long walk to Spring House, the largest unexcavated cliff dwelling in the park. The old structure is very fragile. It has 86 rooms and seven kivas. Because some areas could break off easily, visitors cannot enter the cliff dwelling. But the area offers beautiful views.

National Park Service guides also offer early morning walks to Balcony House. Balcony House is considered a medium-size cliff dwelling. It has 40 rooms. Visitors can climb a ladder, crawl through a long and narrow passageway and climb a steep cliff with stone steps.

Then, they can watch the sun rise from inside Balcony House, and begin their day just as the Pueblo Indians did hundreds of years ago.

Today's Pueblo Indians consider Mesa Verde a sacred place. And for visitors from around the world, it remains a place of mystery and beauty.

site - n. a place where something important has happened

preserved - adj. kept in its original state or in good condition

steep - adj. almost straight up and down : rising or falling very sharply

renowned - adj. known and admired by many people for some special quality

unexcavated - adj. not yet uncovered and explored by archaeological researchers