The Glacial World of Mount Rainier

Update Required To play the media you will need to either update your browser to a recent version or update your Flash plugin.
By Ashley Thompson
22 April, 2016


This week on our National Parks journey, we travel to America's mountainous Pacific Northwest. We are exploring Mount Rainier National Park in Washington state.

The mountain in Washington rises more than 4,300 meters above sea level. It is one of America's most glacier-filled peaks. Snow covers the top of the mountain year-round. Its glacial meltwater forms six major rivers.

The Native Americans who lived in the northwest called the great mountain "Takhoma." One tribe said it was a monster that would eat people. Other old stories among Native Americans said the mountain could produce great amounts of fire. 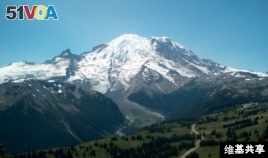 In 1792, British explorer George Vancouver became the first European to see the mountain. He named it after a navy friend, Captain Peter Rainier.

Today the people who live in the northwestern city of Seattle simply call it "The Mountain." Mount Rainier is almost 100 kilometers outside of Seattle. Yet it can be seen from almost any place in the city.

Mount Rainier has long been a popular place to visit. Many people go to enjoy the beautiful and peaceful forests that surround the mountain.Others try to climb to the top of the great mountain.

Hazard Stevens and Philemon VanTrump became the first people known to reach the top of Mount Rainier. They reached the top in August of 1870 after a 10-hour climb through the snow.

In March of 1899, President William McKinley signed a law that made Mount Rainier a national park. It was the fifth national park established in the United States.

Today, about 10,000 people try to climb to the top of Mount Rainier every year. The mountain is extremely difficult to climb. The National Park Service says only about half of the climbers successfully reach the top. Snow and ice cover parts of the mountain year-round. Severe weather is possible at any time. Many people have died trying to climb Mount Rainier.

Experienced mountain climbers often use it as a difficult test for people who want to climb extremely tall mountains around the world.

But, you do not have to be an experienced mountain climber to enjoy Mount Rainier National Park. More than one million people visit the park each year.

Many enjoy hiking along the hundreds of kilometers of paths. The paths lead through flat meadows filled with wildflowers and up through forests of large old trees.

Other visitors drive around the park to experience its natural beauty. They often see black tailed deer, elk, and mountain goats.

The large park is almost 100,000 hectares. Many lakes, rivers, roads, hotels and camping areas are within the park.

Experts believe that Mount Rainier could become a much more active volcano sometime in the near future. They say the real problem is that they do not know exactly when that could happen.

Experts also agree that the great heat produced by a volcanic explosion would melt the rivers of ice that are part of the mountain. This melting could happen in a matter of minutes. The melting ice would then produce flowing rivers of mud and rock. That would put people who live in the southern part of Seattle and in the nearby city of Tacoma in danger.

These experts carefully study the conditions at Mount Rainier. They hope to be able to warn people of any dangerous change.

But for now, the great mountain provides a safe and enjoyable place to visit in America's beautiful Pacific Northwest.

Ashley Thompson adapted this report from material in the VOA Learning English archives. Hai Do was the editor.

glacier - n. a very large area of ice that moves slowly down a slope or valley or over a wide area of land

peak - n. the pointed top of a mountain

explorer - n. a person who travels over or through (a place) in order to learn more about it or to find something